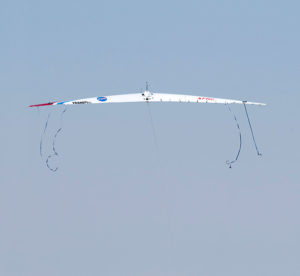 The streamers on the Prandtl-D No. 2 as it is launched illustrate how aerodynamic forces are maximized as birds overlap wingtips when flying in formation.

Flights are scheduled to resume this summer on the flying wing-shaped Primary Research Aerodynamic Design to Lower Drag, or Prandtl-D No.3. The project features a new wing design method and a twist. If the concept continues to prove its value, it could forward NASA’s research goals to prove technologies leading to significant fuel economy and emissions reduction.

The NASA Aeronautics Research Mission Directorate has provided funds for student assistance with the flight research that has been ongoing for more than three years at Armstrong. The Prandtl-D No. 3 is undergoing the addition of instrumentation in preparation for the upcoming flights, said Al Bowers, NASA Armstrong chief scientist and Prandtl-D project manager.

Through a series of remotely controlled-subscale Prandtl-D models in 2013, 2014 and 2015, several with sensors that validated aerodynamic design merits and control expectations of the concept, Bowers, colleagues and students recorded more than three hours of flight data. That research confirms that the bell-shaped spanloading method generates proverse yaw. Proverse yaw is thrust, rather than drag, at the wingtips and makes the aircraft’s tail unnecessary because of the design and not because of the need for electronic controls. The result is greater efficiency and the potential to reimagine airplane design. 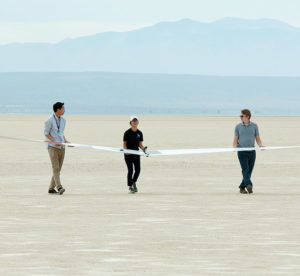 David Lee, Golda Nguyen and Scott Gleason recover the Prandtl-D No. 3 after one of its first flights.

Researchers, industry and academia can learn how wing twist and a radically different bell-shaped spanloading — the load distribution over the wing’s span — could lead to a substantial reduction in drag detailed in a technical paper released in March.

The NASA technical publication is entitled, “On Wings of the Minimum Induced Drag: Spanload Implications for Aircraft and Birds,” NASA/TP – 2016-219072. The publication can be requested electronically, or in paper form, from NASA’s Scientific and Technical Information Office at 757-864-9658, or by e-mail at help@sti.nasa.gov.

“The NASA technical paper is the right approach because we heartily encourage open access to the data,” Bowers said.

The methodology detailed in the report is available for licensing through NASA’s Technology Transfer Program, which seeks to transfer knowledge into and out of NASA to benefit the space program and U.S. Industry. NASA invites companies to consider licensing the Prandtl-D innovations for further development and commercial applications. More information is available through the NASA Armstrong Technology Transfer Office at 661-276-3368 or by e-mail at DFRC-TTO@mail.nasa.gov

In addition to detailing how the Prandtl-D achieved its data, the paper asserts a corollary to birds. Humans first looked to birds as the model of flight but turned away from that model more than a century ago. Bowers contends that birds are the right place to look. Birds, for example, do not have vertical tails but manage coordinated turns and their wings taper to narrow tips without stalling. Unlike aircraft with standard elliptical spanload, which achieves the best efficiency in formation flight by trailing one wingtip directly behind another, birds fly in formation with their wingtips overlapped. Prandtl-D demonstrates why the overlapping of birds in flight is the optimal aerodynamic answer. 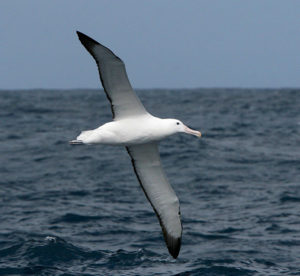 Al Bowers, Prandtl-D project manager and NASA Armstrong chief scientist, believes that birds like this wandering albatross hold some of the answers to efficient flight.

The Prandtl-D wing, which is the foundation of the experiment, will reduce aerodynamic drag by at least 11 percent, Bowers said. Aircraft that use the Prandtl-D configuration without a traditional fuselage and tail could see fuel efficiency gains of more than three times that, or divide gains to obtain increased speed or range using the same amount of fuel, Bowers said.

Thrust at the wingtips is an idea that flies against the winds of traditional aeronautical thought and is now developing wider acceptance.

“No one has criticized the math in our paper,” Bowers said of peer reviewers. “No one has found any sort of defect in the logic. The revolutionary part of this is it allows aircraft designers to completely eliminate the tail on an aircraft and you end up with a flying wing. All of the problems that have traditionally been associated with flying wings, and the reason we put tails on airplanes, appear to be solved by doing this.”

“The Prandtl-D solution contends that once you pick a certain size of aircraft that the purely aerodynamic answer is no longer sufficient. The amount of payload the airplane is going to carry and the amount of structure necessary to carry that payload changes the answer.”

The new research does not preclude traditional methods.

However, times are changing.

“There has been a recent trend for airliners to be smaller than the maximum size. We’re seeing companies move away from the ultra large capacity airliners. With that move, the Prandtl-D wing offers a very viable solution. We think in the long term most aircraft will use this solution because of its minimum drag for a given amount of structure. The same structure with 22 percent longer wing span will result in 11 percent less drag on the aircraft.” 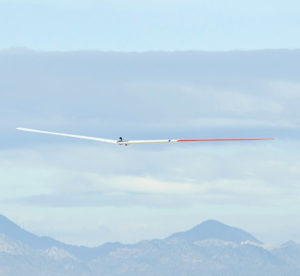 The Prandtl-D No. 3 research aircraft is being readied for new flight tests this summer. It had its first flight Oct. 28, 2015.

Flight data thus far supports the aircraft wing design solutions first proposed by aeronautical engineers in the first half of the 20th century including Ludwig Prandtl. Prandtl was a German whose research is considered a foundation of modern aerodynamics. The aircraft’s designs are based on glider concepts of German brothers Reimar and Walter Horten and the conclusions of NASA aerodynamics pioneers R.T. Jones and Richard Whitcomb.

Aeronautical engineers labor for ways to gain a few percentage points of efficiency and the idea that a different solution could yield such efficiency, “people can’t conceive it can be true,” Bowers said.

As Bowers and his colleagues continue to build the case for the concepts proven with the Prandtl-D, the time may be coming for a new paradigm in aviation, Bowers concluded.