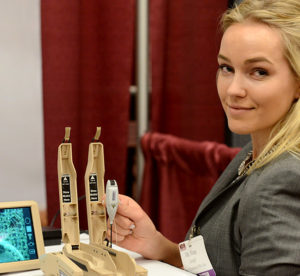 A proposed nano UAS that the Army wants to develop and field will be about the size of a Black Hornet, but will be a completely different UAS system, having no relationship to the Black Hornet. No vendor has yet been chosen and as such, no prototype photos are readily available. Nina Langli, shown here, holds a PD-100 Black Hornet unmanned aerial surveillance aircraft near its two charging stations at the National Defense Industrial Association Special Operations exhibit, Jan. 28, 2015. Langli works at the Norwegian Embassy in Washington, D.C.

The basic small-unit fighting capability of the Army is the squad.

One of its weaknesses is broad-area situational awareness, particularly in unfamiliar environments, according to Col. Phil Cheatham, deputy branch chief of the Electronics and Special Developments Branch at the Maneuver Center of Excellence, or MCOE, Fort Benning, Ga.

A likely solution? A nano unmanned aerial system, or UAS, with reconnaissance capability, he said. For now, it’s called the Soldier Borne Sensor, or SBS.

Cheatham, and others, spoke at a media roundtable, from Program Executive Office-Soldier at Fort Belvoir, Va., March 22.

While large formations have access to intelligence gleaned from helicopters, satellites and large UASs like the Raven, more often than not, the fighters at the squad level don’t know what’s around the corner, over the hill or beyond the trees, particularly in areas where the enemy knows the terrain, he said.

A camera in the sky, perhaps 50 to 70 feet above the ground, would give them that invaluable capability, he said.

Producing such a UAS would seem like a simple thing, but it’s not, Cheatham said.

There are a lot of factors that would determine whether or not the Army would purchase something like this. The British have been using a similarly effective mini UAS called Black Hornet, for several years now, said Cheatham.

However, the United Kingdom army is a lot smaller in comparison to the U.S. Army, which buys things like this in bulk. And, while their Black Hornets are a thing of beauty and function, each is individually hand-crafted and quantities of these could get pretty expensive.

The U.S. Army has incorporated U.K. lessons learned into its requirements and experiments, Cheatham added.

For at least a century, much has been written about the Soldier’s load, meaning that they go into combat carrying heavy stuff that inhibits their effectiveness, Cheatham pointed out.

While a mini UAS, the size of a sparrow or even a bumblebee may not sound like much, it could be enough of a tipping point to limit combat effectiveness. Thus, a lot of emphasis has been placed on weight limitations.

General requirements would be a UAS not weighing over 150 grams and perhaps fitting in a Soldier’s cargo pocket where it could be trickle charged in two hours or less.

Ideally, the UAS would fly about 1,000 meters, 50 to 70 feet in the air for 10 to 15 minutes. That would be a “game changer” for squad situational awareness, Cheatham said. They could most likely control and dominate their area out to the limits of their small-arms fire capabilities.

Experiments at Army battle labs have even tested functionality at the platoon level for standoff ranges of weapons out to 1,200 meters, he said, noting that the Army has already been testing some commercial off-the shelf, or COTS variants.

Currently, the requirements call for day and night camera capability, able to detect a man-sized target with 90 percent probability from 75 feet high, he said. The requirements for all of its capabilities are being staffed right now and could change slightly.

The Army would also like these mini UASs to be as quiet as a bumble bee, Cheatham mentioned, so as not to alert the enemy.

They should be able to also operate on certain military-only radio frequencies, he said. Allowable frequencies for these are different in the U.S. from those overseas.

It would be nice for the system to be simple, meaning a minimum of training time and ease of operation, Cheatham said.

Also, the system should be able to rebound from human or machine error, he said. For example, if a Soldier dropped or damaged the controller, it would be nice for the UAS to stop in midair rather than continue on in an unintended direction. That might be an important safety feature as well.

Maj. Alexander Gonzales, assistant product manager, MCOE, said the proposed SBS must also be capable of tactical employment out of the range of contact and under constrained rules of engagement, and be inherently safe to operate without damage to equipment or injury to personnel.

The best thing the Army can do, Cheatham said, is get these prototypes in the hands of Soldiers for some real-world field testing. “Experimentation informs requirements,” he said.

Equal or greater to industry feedback is feedback from Soldiers, he added. Soldiers inform what needs to be changed or what works. Their input is the ultimate test. “Either they say it hinders or helps the mission, or provides no added benefit.”

Soldiers are already experimenting with prototypes, Cheatham said. The next goal is eventually getting them fielded. But first, industry will need to help make that happen.

That process is taking place this year.

Lt. Col. Timothy A. Fuller, assistant product manager, SBS, Project Manager, Soldier Sensors and Lasers, or PM SSL, PEO-Soldier, Fort Belvoir, said that the Soldier Enhancement Program, or SEP, is a program in which COTS items are procured and tested “to see if they can make a difference to soldiers. This is an extremely cost-effective way to try out and test new technologies.”

That process will be applied to procuring SBS, he said.

Fuller also pointed out that the Army is inviting small and large businesses to participate in “industry days” to discuss opportunities to build SBS, using requests for information, followed by a request for proposal.

The next industry day is April 12, he said.

Gonzales added. “We encourage large companies, small companies, and even startups with great ideas to join us for the industry day.”

Fuller said the Army will likely make limited purchases of SBS candidates over the next year or two and then move forward on larger-scale buys in fiscal year 2018.