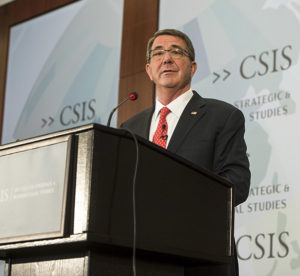 Defense Secretary Ash Carter addresses the Center for Strategic and International Studies in Washington, D.C., April 5, 2016. In his remarks, Carter proposed updating the Goldwater-Nichols Act of 1986, legislation that solidified the military chain of command and reinforced the concept of “jointness.”

To best confront challenges in an increasingly complex world, the law that defines much of the Defense Department’s institutional organization needs to be updated, Defense Secretary Ash Carter said April 5.

The Goldwater-Nichols Act of 1986 is an important piece of legislation that solidified the chain of command and reinforced the concept of “jointness,” Carter said at the Center for Strategic and International Studies.

In remarks that focused on updating the legislation, the secretary called for clarifying the role and authority of the chairman of the Joint Chiefs of Staff, adapting combatant commands to new functions, streamlining acquisition, and making changes to joint personnel management.

“This year, as Goldwater-Nichols turns 30, we can see that the world has changed,” Carter said. “Instead of the Cold War and one clear threat, we face a security environment that’s dramatically different from the last quarter-century.”

In some cases, he said, the “pendulum between service equities and jointness may have swung too far,” such as not involving the service chiefs enough in acquisition decision-making and accountability.

“It’s time that we consider practical updates to this critical organizational framework, while still preserving its spirit and intent,” he said.

He said the Defense Department needs someone in uniform who can look across the services and combatant commands and make objective recommendations to the department’s civilian leadership about where to allocate forces throughout the world and where to apportion risk to achieve maximum benefit to our nation.

“The person best postured to do that is the chairman of the Joint Chiefs of Staff,” he said. The role of chairman needs to stay outside the chain of command, Carter added, to allow the chairman to provide the best, most objective advice to the president and secretary of defense.

Carter said updates are needed in the combatant commands, adapting them to new functions — including in cyber — and continuing to aggressively streamline headquarters.

Carter explained the Defense Department is looking to “simplify and improve” command and control by making it less top-heavy and more efficient.  Where possible to improve efficiencies and effectiveness, billets currently filled by four-star generals and admirals will be filled by three-star officers in the future, Carter said.

A major area where Goldwater-Nichols needs to be improved is in joint personnel management, Carter said. He noted that one of the hallmarks of the legislation is that it made joint duty required for all officers who wanted to rise to the highest levels in the military.

Carter said the definition of a “joint duty assignment” needs to be broadened. The department is proposing the definition goes beyond planning and command and control to include joint experience in other operational functions such as intelligence, fires, transportation and maneuver, protection, and sustainment, including joint acquisition. “For example,” the secretary said, “while a staff officer in a combatant command would get joint duty credit, an officer in a combined air operations center coordinating with service members in all different uniforms to call in airstrikes against ISIL might not.”

Updates to the legislation must not undo its “many positive benefits,” Carter said. The need for the reform comes down to one simple reason, he added: to help the people who wear the uniform.

“We do this because our service members, and the nation they protect, deserve the best Defense Department and military we can give them, because they’re giving their best day in and day out, all around the globe,” he said.