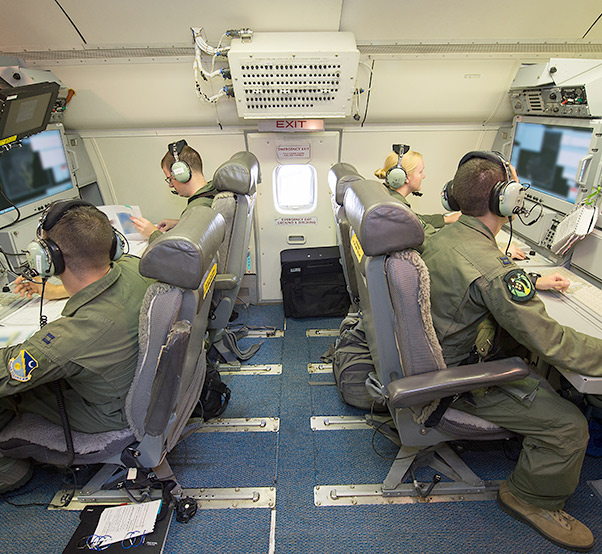 U.S. airmen with the 12th Airborne Command and Control Squadron perform pre-flight ops checks on an E-8C Joint STARS in preparation for a mission during a combat exercise at Robins Air Force Base, Ga., in July 2015. JSTARS is a key warfighting asset that provides airborne battle management command and control and intelligence, surveillance and reconnaissance information about ground movements to detect and track enemy forces and is undergoing a recapitalization effort. As part of that effort, the JSTARS Recap program office at Hanscom Air Force Base, Mass., awarded two contract actions March 24 for radar risk reduction efforts.

The Joint Surveillance Target Attack Radar System, or JSTARS, is a key warfighting asset that provides airborne battle management command and control and intelligence, surveillance and reconnaissance information about ground movements to detect and track enemy forces. With the awarded sole-source undefinitized actions, Northrop Grumman Systems Corp. can receive up to $70.2 million and Raytheon Space and Airborne Systems up to $60 million for nonrecurring hardware and software engineering activities to ensure radars are scaled to meet JSTARS Recap Wide Area Surveillance requirements.

“We have awarded these contracts to burn down key risks relative to scaling radar designs to work for a Recap Weapon System solution, ensuring an executable EMD [engineering and manufacturing development] phase,” said Col. David Learned, JSTARS Recap program manager. “The fastest way to IOC [initial operational capability] is to have an executable program.”

Program officials say the radar is a key element in providing the system’s wide-area surveillance capability from long standoff ranges and that updating to the most current technology will make it more effective and efficient. Areas to be looked at are using an active electronically scanned array, or AESA, which will allow JSTARS Recap to meet mission performance standards while operating on a much smaller business-class jet airframe, and using an open system architecture approach.

“An open system architecture will provide Recap the flexibility to leverage existing technology and provide the added benefit of more efficiently integrating new technology in the future,” said Brian Carr, JSTARS Recapitalization Radar deputy IPT lead. “However this radar scaling and adaptation to a smaller platform with fewer crew is work that has not been done before. We want to prove feasibility in the TMRR [technology maturation and risk reduction] phase prior to launching into a full out EMD program.”

The JSTARS Recap program officially reached a Milestone A decision on Dec. 10, 2015, allowing entry into the TMRR phase and authorizing the program to exercise options on three separate pre-existing contracts.

Prior to awarding the new radar contracts, the program received an Acquisition Decision Memorandum, or ADM, from the Undersecretary of Defense for Acquisition, Technology and Logistics, specifically to execute planned radar risk reduction activities as part of the TMRR phase.

“This is our third ADM in less than 11 months,” Learned said. “We are currently executing five contracts and on track for our EMD RFP release as planned.”