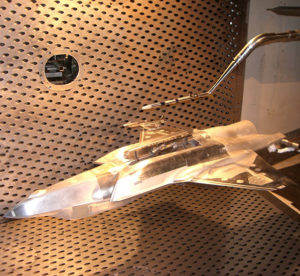 Separation testing of the ASRAAM, or AIM-132, was conducted in the 4-foot transonic aerodynamic wind tunnel at the AEDC Propulsion Wind Tunnel facility in 2008. Pictured is a test model of the F-35 with AIM-132 separating from the weapons bay.

The objective of the test was to investigate the separation characteristics of several armaments, which included the AIM-132 as well as the AIM-9X, AIM-120C, AGM-154 Joint Stand-off Weapon, GBU-32 (1,000-pound Joint Direct Attack Munition) and Paveway IV, from internal and external weapons stations of the Short Take-off and Vertical Landing and Carrier Variant versions of the JSF aircraft.

According to the recent release by MBDA, the ASRAAM is intended for the Royal Air Force and Royal Navy’s F-35Bs and will provide British Lightning IIs with a “highly capable, passive, within visual range air-to-air capability.”

Integration and test efforts at Edwards AFB, Calif., and Naval Air Station Patuxent River, Md., will include captive carry and safe-separation tests that will eventually lead to live shots against representative targets. The ASRAAM integration is anticipated to be a step toward the RAF and RN declaring initial operational capability with the F-35 by end of 2018. The UK has committed to purchasing at least 138 of the strike fighters.