Regional teachers participated in an educator workshop to learn about the one-year study of identical twins astronaut Scott Kelly who was on the International Space Station and former astronaut Mark Kelly who remained on Earth, referring to this study as: A Stepping Stone Toward Our Journey to Mars.

The workshop was held at the NASA Armstrong Flight Research Center’s Office of Education’s Resource Center located at the AERO Institute in Palmdale, Calif., March 2.

The workshop also celebrated the return of Astronaut Scott Kelly and Cosmonaut Mikhail Kornienko from the ISS. The educators learned about how living in space affects astronaut’s nutrition, radiation, solar energy, and light spectrum as well as highlighted the accomplishments of the One-Year Crew mission. 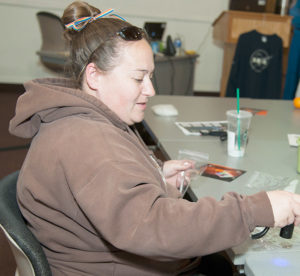 Informal educator Jill Rowe uses an ultraviolent light to observe how this light causes beads that have photochromic chemicals to change color.

“What a great way for educators to celebrate the accomplishments of NASA’s One-Year Crew mission but also think about the next steps in our Journey to Mars,” remarked Barbara Buckner. “While Astronaut Scott Kelly made the American record for the longest time off our planet at 340 days, understanding the physical, mental and social impacts of long-term space flight is a stepping stone toward what is needed for our Journey to Mars.”
Scott Wiley explained the dynamics of space weather including solar flares and radiation.  He highlighted Armstrong’s Upper-atmospheric Space and Earth Weather eXperiment, USEWX, which uses dosimeters that monitor radiation dosing onboard Armstrong aircraft.

“Radiation that is present in the upper atmosphere is harmful to humans and sensitive electronic equipment,” Wiley explained. “When aircraft are flying at higher altitudes and over polar routes they are exposed to much higher radiation than the non-flying public.

M. Jamison, a mathematics and science teacher at Luther Burbank Middle School in Burbank, California, said, “I was enriched in my understanding about space weather and radiation while being reminded of the great opportunity that I have to be a positive influence on the students within my classroom every day.”

Besides learning about the effects of radiation on the human body due to living in space, participants engaged in activities that introduced proper dietary requirements of the astronauts on station through a space food demonstration. Educators also signed a “Welcome Home, Scott” return- to-Earth banner that has been sent to Astronaut Scott Kelly. 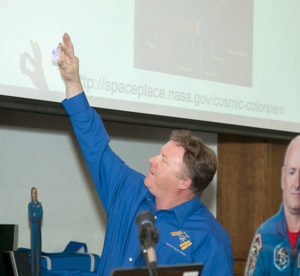 “We are always glad to come and be part of the children’s future by using this great information,” said Jill Rowe, an informal afterschool educator from Wallace Elementary, Kernville Union School District in Lake Isabella, California.  “The workshop, activities, and information were so great!”
“Teachers who come to these professional development workshops are exceptionally dedicated and gifted,” exclaimed Wiley. “Space weather and radiation are complex issues having advanced scientific concepts. The intellectual nature of the teacher’s questions indicated an advanced understanding of heliophysics.”

This educational activity aligns to NASA education’s goal of continual support for STEM educators through the delivery of NASA education content and engagement in educator professional development opportunities.