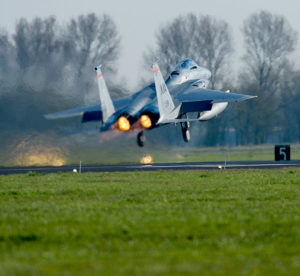 A U.S. Air Force F-15C Eagle fighter aircraft assigned to the 131st Expeditionary Fighter Squadron takes off during a theater security package deployment at Leeuwarden Air Base, Netherlands, April 11, 2016. The F-15s represented a theater security package rotation, which began in the European theater in 2015 to reassure NATO allies and partner nations of the U.S. commitment to the security and stability of Europe.

The units, under the designation of the 131st Expeditionary Fighter Squadron, along with airmen from Spangdahlem and Ramstein Air Bases in Germany, will operate as a theater security package to conduct training with NATO allies and partners.

The TSP serves as part of Operation Atlantic Resolve, which aims to strengthen interoperability and demonstrate U.S. commitment to a Europe that is whole, free, at peace, secure, prosperous and able to deter aggression.

“This is just another great example of the U.S. Air Force’s expeditionary Airmen to pack up very quickly and deploy its forces and personnel into various nations throughout Europe and the globe,” said U.S. Air Force Maj. Gen. Eric Vollmecke, ANG mobilization assistant to the U.S. Air Forces in Europe — Air Forces Africa commander. “What’s very unique about the U.S. Air Force is that – either with our active, guard, reserve and national guard components — everybody is training at the same standards and is always ready to go. It gives us as an Air Force a great amount of flexibility so we can bring parts of multiple units together and create an expeditionary unit.”

The general highlighted how the U.S. Air Force’s presence in Europe has declined from 25 major operating air bases to five and from 800 aircraft to just 200 while the number of allies and partners has grown within the last quarter century. 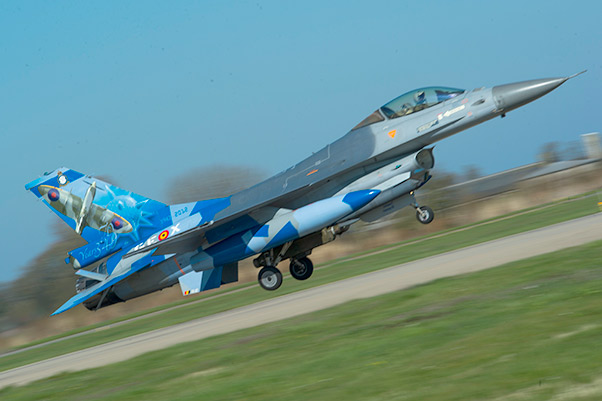 A Belgian Air Force F-16 Fighting Falcon fighter aircraft takes off during Frisian Flag 2016 at Leeuwarden Air Base, Netherlands, April 11, 2016. More than 70 aircraft and personnel from the United States, Netherlands, Belgium, France, Finland, Poland, Norway, United Kingdom, Germany and Australia will participate in Frisian Flag 2016 at Leeuwarden April 11-22, 2016, with as many as 50 executing flight operations each day.

“What’s important to us over here in Europe is to leverage the airmen we have based here in Europe down to five major bases to help enable those deployments for our Air Forces to come over here and work with our allies and partners,” he said. “Our ability to have these rotational forces to come in and augment our forces in Europe is very important to our overall strategy and working with our partner nations and reassuring our allies.”
The eight F-15 Eagles will also participate in Frisian Flag 2016, a multilateral exercise hosted by the Royal Netherlands air force at Leeuwarden. This endeavor marks the second involvement between the U.S. Air Force and Frisian Flag under the scope of Operation Atlantic Resolve.

“Once again, this is a great opportunity for the United States, and we welcome our opportunity to come up here to the Netherlands,” Vollmecke said. “The air space is great. This is a very high-end exercise for us to participate in, and we’re happy to be here.”

Aircraft and personnel from the United States, Netherlands, Belgium, France, Finland, Poland, Norway, United Kingdom, Germany and Australia will participate in Frisian Flag 2016 at Leeuwarden April 11-22, with as many as 50 of the nations’ 70 aircraft executing flight operations each day. Leeuwarden has hosted Frisian Flag since the exercise’s inception in 1992.

“We’ll increase knowledge, skills, leadership and effectiveness of the individual aircrew of the units that participate, and thereby increase the effectiveness of the coalition,” Traas said. “If we operate together, we need to train together. That’s our motto, and that’s what Frisian Flag does.” 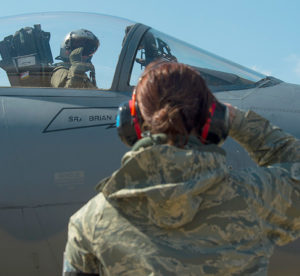 A1C Sarah Stec, a 104th Aircraft Maintenance Squadron crew chief with the Massachusetts Air National Guard, salutes a 131st Expeditionary Fighter Squadron F-15C Eagle fighter aircraft pilot in his cockpit during a theater security package deployment at Leeuwarden Air Base, Netherlands, April 12, 2016. The F-15s will conduct training alongside NATO allies to strengthen interoperability and to demonstrate U.S. commitment to the security and stability of Europe. The F-15s from the Massachusetts and California Air National Guard are deployed to Europe as part of the TSP.

“Our biggest goal is to interoperate with all of our NATO partners and to build those relationships for any future need or to be closer tied to people who may or may not be deployed with us in contingency operations,” Halasi-Kun said. “We’re really looking forward to operating with all of the partners here and figuring out how the air-to-air game plays out, because the air-to-air is very special to the F-15C.”

Four 131st EFS F-15 Eagles remain at Keflavik, Republic of Iceland, to participate in Icelandic Air Surveillance. They will rejoin their squadron on the continent as the TSP deployment continues to reassure NATO allies and partner nations.

“The TSP’s intent is to demonstrate capability not only to our coalition partners–all of the people who we join in like-minded ideas of security and safety – but to also send a message to those who want to cause destabilizing aggression across the world or theater or Europe,” said U.S. Air Force Maj. Gen. Scott Rice, Massachusetts National Guard adjutant general. “We’re sending a message to all players that destabilizing aggression is not good for anyone. The TSP is integral to Atlantic Resolve and how it presents forces all across Europe, the Atlantic and the United States, too.”

Rice also added how the theater security package has changed the way people should rethink how they view the term “total force” as it relates to active, guard and reserve capabilities.

“I look at total force as every single person who has U.S. Air Force on their uniform and all of the civilians who work just as hard as those who are in uniform,” said Rice, who was recently nominated by U.S. Secretary of Defense Ash Carter to command the Air National Guard. “Every capability we bring to the table is part of what makes us innovative and special for the U.S. government and the world and how we fly, fight, and ultimately win in all of our conflicts.”