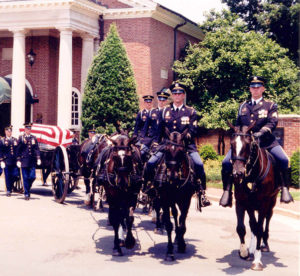 Capt. Larry Thorne, missing in action for decades, was given full honors and laid to rest at Arlington National Cemetery June 26, 2003. Thorne is a national hero in his birth country of Finland and a military hero in the country for which he swore allegiance and laid down his life–the United States. USASAC employee Andy Hollingsworth was instrumental in bringing one of the Green Beret’s most legendary soldiers home.

Larry Thorne would have been 97 next month.

And as his May 28 birthday approaches, one U.S. Army Security Assistance Command employee reflects on the life and legacy of one of the first and most renowned Green Berets in American history.

Andy Hollingsworth, an operations specialist with U.S. Africa Command/ European Command Regional Operations, was a young Army captain on a joint task force recovery team that discovered Thorne’s remains at a crash site deep in the mountains of Vietnam in the summer of 1999.

Born Lauri Allan Torne in Finland, in 1919, Thorne would distinguish himself, leading an elite detachment of Finnish ski troops (think James Bond) on raids behind Soviet lines, commanding a Waffen-SS sabotage squad, and unleashing such crippling guerrilla attacks against the Soviets that they put an unheard-of 3 million Finnish mark bounty on his head.

These and other feats made Thorne a military legend long before he became a political refugee, jumping overboard from a cargo ship in the Gulf of Mexico near Mobile and eventually joining the Army. Thorne enlisted in 1954 as a private, although he’d spent six years fighting World War II as an officer in two different military commands.

Hollingsworth said Thorne can only be described as a quiet professional.

“Men like Larry are called to serve others,” said Hollingsworth, “but not all volunteer for the types of training and assignments Larry did. He left his home-country to fight for one that was not his native home, but for the men to the left and right of him.”

Thorne fought for the Finnish and German armies against the Soviets, earning the U.S. equivalent of the Medal of Honor, before joining a fledging U.S. Special Forces, where he shared years of hardcore experience in survival, mountaineering, ski warfare, guerilla tactics and other unconventional warfare. 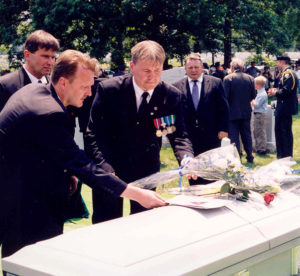 During his first decade of service in the Army, he trained NATO forces in West Germany, and ran a sabotage and reconnaissance school for the 10th Special Warfare Group. Today, the Army Special Forces gives the Larry Thorne Award annually to its toughest Green Beret detachment.

One of Thorne’s crowning achievements was during the 1950s when he led a covert mission into the Iran to recover bodies and classified data from a C-130 transport plane that had gone down in the country’s largest mountain range. Three missions had attempted to get to the crash site and failed, so Thorne parachuted in, made his way up 14,000-feet deep in enemy territory, recover the data and snuck out undetected.

Repeatedly proving his worth, Thorne advanced in rank and was commissioned a first lieutenant in the U.S. Signal Corps in 1957. He later received a regular commission and was promoted to captain in 1960.

By the time the U.S. entered Vietnam, Thorne had annihilated enemy forces in waist-deep sub-zero snowdrifts, in mud-covered rainforests and commanded black ops in the Middle East. He was a natural for the highly classified Military Assistance Command, Vietnam-Studies and Observations Group.
During two tours in Vietnam with the MACV-SOG, Thorne ran deep cover into Cambodia and Laos to track down the North Vietnamese supply network that became known as the Ho Chi Minh Trail. Wounded on several occasions and earning two Purple Hearts, his last mission took place in 1965 when his helicopter went down behind enemy lines across the Laotian border.

Although his chopper crashed and he was listed MIA for over three decades, the mission was a success: his men called in 51 air strikes to disrupt the Ho Chi Minh Trail supply stations and made it out alive. Today, Thorne is interred at Arlington National Cemetery. He was posthumously promoted to major and is the only American POW/MIA to fight communism under three flags — Finland, Germany and America. The Larry Thorne Headquarter Building for the 10th Special Forces Group at Fort Carson, Colo., is named in his honor; several books and movie characters proclaim his feats.

Hollingsworth called Thorne a true patriot and said it was one of his deepest honors to serve on Joint Task Force Full Accounting — congressionally mandated to achieve the fullest possible accounting of U.S. troops who didn’t from the war in Southwest Asia. JTFFA consisted of investigators, linguists, military specialists, DOD civilians, anthropologists and forensic archeologists.

“Being assigned to JTFFA was an opportunity to serve my country and bring our guys home,” said Hollingsworth, who spent 23 years on active duty.
“I had been selected to attend the Special Forces Qualification Course and was assigned post company command to 7th Special Forces Group (Airborne) at Fort Bragg.”

He was then informed that SF was over their 115 officer limit and Quartermaster was short by 100. So they assigned Hollingsworth to the Central Identification Lab, Hickam Air Force Base, Hawaii. His disappointment at not remaining at the SF assignment was quickly replaced by enthusiasm. He hit the ground running, travelling the globe 280 days out of the year on recovery missions.

“I had no idea the organization even existed but it appealed to me because of the travel and negotiations with communist officials as the sole U.S. military presence in the country outside the embassy,” Hollingsworth said. “To negotiate with senior Vietnamese colonels about sites, cost to the U.S. government, and to brief U.S. Embassy officials on my teams’ presence, as a captain, was pretty exciting.

“Whenever I think of a country, it brings back memories,” he said. “I’m fortunate the Army sent me, or I have traveled as a tourist, to over 56 countries.”

But the recovery missions were, hands-down, his favorite assignment.

“Anytime you can bring a service member home and give families closure, there’s nothing better,” said Hollingsworth, who recalled the look on families faces when they get the news.

“The message to our troops is: we will bring you home. There is comfort in that knowledge that no matter where you go to perform your duties, that commitment is still there.”