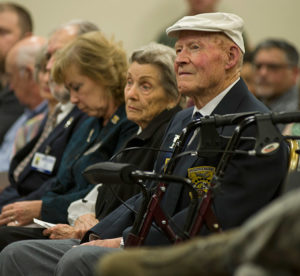 SSgt. David Thatcher, a Doolittle Raider, attends the Doolittle Raider ceremony April 18, 2016, at Fairchild Air Force Base, Wash. The Doolittle Raid was a pivotal point in World War II giving a morale boost to America and proving to the Japanese military that their home islands were not invincible.

One of two surviving Doolittle Raiders visited Fairchild Air Force Base, Wash., for a commemorative toast April 18 in honor of the 74th anniversary of the Doolittle Raid on Tokyo.

Former SSgt. David Thatcher, who served in the Army Air Forces as a member of Flight Crew No. 7, was part of the air raid led by then-Lt. Col. Jimmy Doolittle. It marked the United States’ first strike on the Japanese islands in World War II.

“The Doolittle Raid showed what we can accomplish when we work together to achieve a common goal,” Thatcher said, now in his mid-90s. “I hope that Airmen will continue to honor the raid and remember what was done.”

In the years leading up to the raid, Japan had annexed Korea, invaded China and other parts of mainland Asia, and ultimately bombed Pearl Harbor, Hawaii, on Dec. 7, 1941. The Allies were desperate to send the Japanese Empire a message that it was not invincible. Though the damage inflicted on Japanese targets in the strike was seemingly insignificant, the Doolittle Raid emphasized the war was not over. America’s Pacific fleet was still reeling from damage incurred at the war’s opening but the sea-to-air attack, launched from the deck of the USS Hornet just a few hundred miles from Japan’s coast, showed America was a force to be reckoned with. 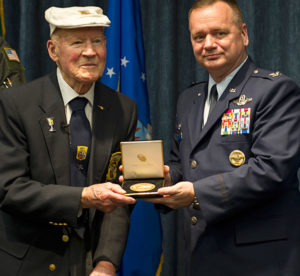 The Hennessy toast, part of an annual tradition of the Doolittle Raiders, symbolizes Doolittle receiving a vintage 1896 bottle of cognac on his 60th birthday in 1956. The bottle was opened at the final 2013 group celebration, where three of the 80 Raiders were in attendance. In times of commemoration since, the Hennessy toast celebrates the raid and its accomplishments.

“What an incredible opportunity for the airmen of Team Fairchild to hear firsthand the story of 80 great Americans who launched an incredibly daring and dangerous mission despite knowing that they might not make it,” said Jim O’Connell, the 92nd Air Refueling Wing historian. “Sergeant Thatcher and his fellow Doolittle Raiders, who were ‘just doing their job,’ through their actions, established another milestone in a legacy of excellence, and created, forever, an indelible mark in the history of the United States.”

The legacy of Thatcher and his comrades lives on in the minds of today’s Airmen.

“It’s not every day you have a Doolittle Raider on stage with you,” said Col. Brian McDaniel, the 92nd ARW commander. “We all remember the photographs in our history books of the planes taking off from the Hornet. What an honor to have a legend here with us today.” 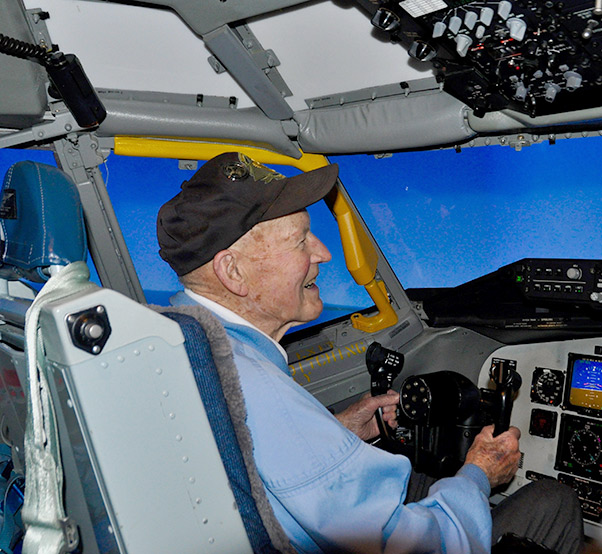 Former SSgt. David Thatcher, one of two surviving Doolittle Raiders, pilots a KC-135 Stratotanker flight simulator April 18, 2016, at Fairchild Air Force Base, Wash. The simulator was configured to recreate the path 16 B-25 Mitchell aircraft flew over Tokyo on April 18, 1942.