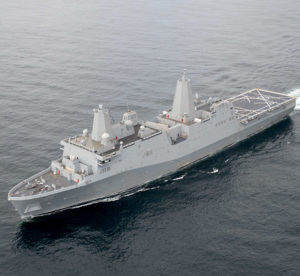 During these trials, the HF DAG system successfully transmitted and received transmissions between LPD 26 antennas and established contact with other vessels, such as the USS Montgomery (LCS 8) afloat. In addition, communication with naval shore stations more than 200 miles away in Mayport, Fla., proved the dependability of the system.

“The John P. Murtha is leading the Navy by employing this new communications system and that is ground breaking,” said Lt. Jonathan Saewert, LPD 26 Combat Systems officer. “When coupled with other radio gear, we have double the radio capability of a typical Navy ship.”

HF DAG is a user-friendly system that utilizes touch screen technology compatibility with commercial equipment, which saves the military substantial financial cost, Saewert said. The Navy will not have to develop a unique system to accomplish the same task.

“Previously, a Sailor on watch could only listen to one channel at a time on a single radio,” Saewert said. “Now, with HF DAG in conjunction with other radio gear, the Sailor can listen and monitor four channels at one time on four different radios. It’s keeping our Sailors at the forefront of technology.”

Nathaniel Panis, HF DAG In-Service Engineer attached to Space and Naval Warfare Command and who assisted in the Builder’s Sea Trials, said several types of communications methods are employed by the military.

One example is digital modular radio (DMR), which provides multiple wavelength, waveforms and information security for voice and data communications.

“We had an incredible amount of shipwide testing during these Builders Sea Trials and Acceptance Sea Trials — the HF DAG test was without a doubt a complete success,” he said. “We are saving space on the ship with less equipment performing more efficiently and saving the Navy money with increased capability with this cutting-edge technology.”