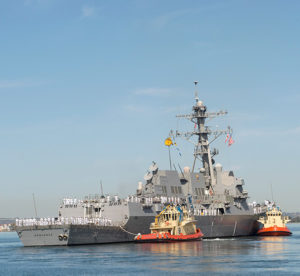 The destroyers will join Arleigh Burke-class guided-missile destroyer USS Momsen (DDG 92) in the waters off Southern California before heading to the Western Pacific as the Pacific Surface Action Group, or (PAC SAG).

Historically, the U.S. 7th Fleet commander would assume control of ships that cross the international date line into the Western Pacific. The initiative provides more operational flexibility to the combatant commander by applying the command and control capabilities of both numbered fleets based on specific missions rather than geographic areas.

As more units deploy as part of this initiative, 3rd Fleet and 7th Fleet forces will complement one another seamlessly in support of security, stability and prosperity in the Indo-Asia-Pacific region.