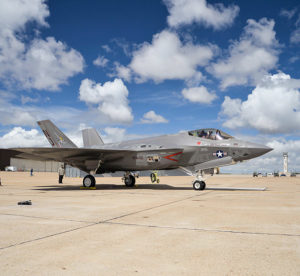 An F-35C Lightning II arrives April 15, 2016, at Hill Force Base, Utah. The aircraft is the first Navy variant to arrive at the base where it will undergo depot modifications through this summer. The aircraft is assigned to the Navy’s Strike Fighter Squadron 101 at Eglin AFB, Fla.

The F-35C was flown in from Eglin Air Force Base, Florida, by Navy Capt. Mark Weisgerber, the 33rd Fighter Wing vice commander.

“Hill has the capacity to accomplish the needed modifications and it is important to optimize the workflow within the Air Logistics Complex,” Weisgerber said.

The first F-35 arrived at Hill AFB for modifications in September 2013. Since then, the depot has performed modifications on the Air Force’s fleet of conventional takeoff and landing F-35As. It also has completed work on four Marine Corps F-35B short takeoff/vertical landing aircraft, helping the Marine Corps reach initial operational capability.

For the Navy’s carrier variant, the complex’s 570th Aircraft Maintenance Squadron, along with Lockheed Martin, will perform structural upgrades, low-observable restoration and system modifications that will enhance performance across the aircraft’s service life. 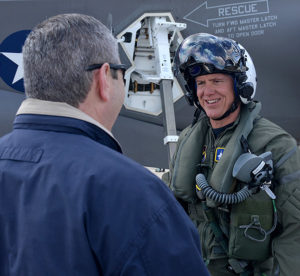 Navy Capt. Mark Weisgerber, the 33rd Fighter Wing vice commander, is greeted by Greg Hoffman, the 570th Aircraft Maintenance Squadron director, at Hill Air Force Base, Utah, April 15, 2016. Weisgerber flew an F-35C Lightning II to the base where it will be modified at the Ogden Air Logistics Complex. The complex is the first to work on the entire fleet of F-35 variants, which also includes the Air Force’s F-35A model and the Marine Corps’ F-35B model.

“The men and women of the 570th (AMXS)have risen to the challenges of supporting the dynamic changes in this program and take great pride in being the first depot to work on all three variants of the F-35,” said Greg Hoffman, the 570th AMXS director.

With the program’s ever-evolving requirements, exact numbers of how many aircraft will be worked on this year is not yet available. The squadron’s main focus will center on completing work on the Air Force fleet of F-35A models and Navy’s F-35C models, and returning the aircraft to the war fighter better than they arrived.

“We were able to support the U.S. Marine Corps with critical modifications on the F-35B to meet their initial operational capability (IOC) milestone,” Hoffman said. “Today, we are working closely with the 388th Fighter Wing to provide modifications that will ensure they are able to meet their IOC target with the F-35A and are proud to support the Navy with work on the F-35C.”

The complex had been planning for the arrival of the C-model for months and expects work on the fighter jet to last through early September as workers train with the aircraft and perform verification and validation on the new modifications.