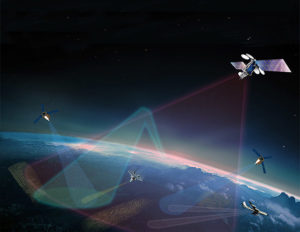 Advanced layered sensing, command and control and cyber technologies are anticipated to be important contributors to future Air Force capabilities. Air Force officials are rejuvenating the strategic development planning process to deliver the multi-domain solutions needed to fly, fight and win in 2030 and beyond.

In 2030 and beyond, the Air Force will achieve air superiority with a networked family of capabilities that may include legacy systems like the F-22 Raptor and F-35 Lightning II, new concepts such as manned/unmanned teaming, and advanced weapons including lasers, hypersonic munitions, or cyber capabilities.

Gen. Ellen M. Pawlikowski, the AFMC commander, said it will be a key component of a new Air Force strategic development planning effort. Its focus is future multi-domain capabilities needed, in part, to support the third offset strategy.

A small Air Force strategic development planning team of about 10 military and civilian Airmen will be established within AFRL. The team will be augmented by experts from across the Air Force operational, acquisition, and planning communities to explore both materiel and non-materiel solutions to inform senior Air Force leadership strategic decisions.

Many analysts acknowledge peer competitor military capabilities are on a path to parity with the U.S. in several key mission areas. The gap is closing on the extraordinary technological advantage U.S. forces have enjoyed since the advent of precision-guided munitions, stealth and integrated command and control. These capabilities, known as the second offset, were the result of a focused long-range development planning effort initiated in the mid-1970s to counter the Soviet Union’s numerical advantage in conventional weapons.

Now Pentagon strategists and the research and development community are focusing their energies on identifying a new third offset to deter conflict and, if deterrence fails, defeat a major power adversary.

“I think we all have the same ultimate objective when we talk about pursuing the third offset, which is to mine those technologies that give us back that technical edge,” Pawlikowski said. “This is all about providing agile war-winning Air Force capabilities for the future.”

Pawlikowski said the new strategic development planning effort will “marry up” operational warfighters and doctrine experts from all Air Force domains with the acquisition and technology community. It will incorporate investments in new operating concepts, wargaming, experimentation, as well as mature and emerging technologies to focus on addressing Air Force needs and gaps 15 to 20 years from now.

She acknowledged development planning had long been a core Air Force competency, but a discipline that has been allowed to wane with various Air Force reorganizations and years of intense focus on the current counterterrorism fight. As a result, programming solutions for filling gaps became more platform-centric, rather than strategy focused. Assessments under the new effort will involve multi-domain, air-space-cyber approaches to solutions.

She noted experimentation dollars and small investments in modeling and simulation are already funded to support the effort. The effort will likely explore the role of “game-changers” like directed energy and hypersonics in future joint operations.

“Of course cost is always going to be in the calculus,” she said. “Because affordability is going to be a key element for the Air Force, now and into the future.”