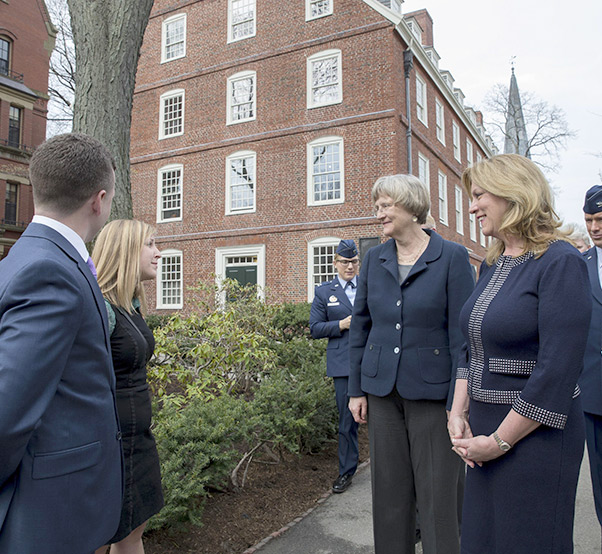 Air Force Secretary Deborah Lee James tours Harvard University in Cambridge, Mass., before signing an agreement officially brining the Air Force ROTC program back to the school April 22, 2016. It marked the first time the school has officially recognized the Air Force program since school officials stripped the program of its academic standing in 1971. James was accompanied by Harvard President Drew Faust.

The secretary signed an agreement at Harvard University, Massachusetts, re-establishing the Air Force ROTC detachment there. After establishing one of the country’s first ROTC detachments in 1916, university administrators removed the school’s ROTC academic standing during Vietnam War protests in 1971.

After the Defense Department’s “Don’t Ask, Don’t Tell” policy was repealed in 2011, Harvard re-established the ROTC program, starting with the Navy.
“Leveraging the best talent America has to offer is our secret weapon,” James said, standing in front of a small crowd of cadets and administrators after the signing. 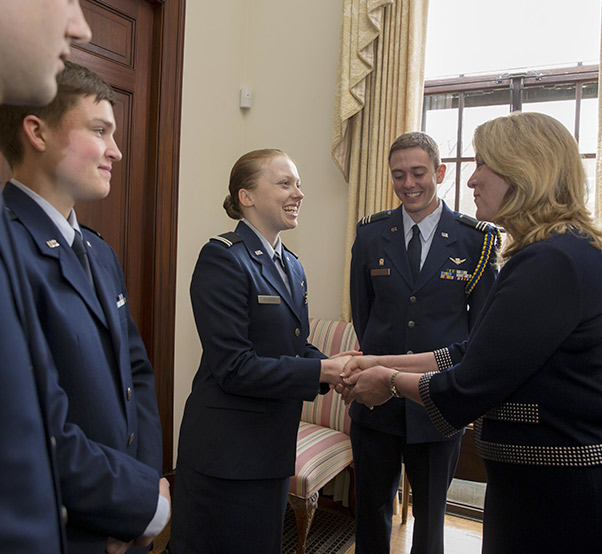 Air Force Secretary Deborah Lee James greets Air Force ROTC cadets at Harvard University in Cambridge, Mass., after signing an agreement officially bringing the program back to the school April 22, 2016. This marks the first time the school has officially recognized the Air Force program since school officials stripped the program of its academic standing in 1971.

Before the signing, James toured the storied campus, focusing on its military history, which dates back to the Revolutionary War. According to its website, Harvard students have contributed to every major conflict in U.S. history, and the school boasts 18 Medal of Honor recipients, including President Theodore Roosevelt for his actions in the Spanish-American War and U.S. Army Brig. Gen. Theodore Roosevelt II, who led one of the first waves of men onto the Normandy beaches during D-Day.

James, however, focused on the future while speaking to staff and students.

“I am proud to be here to recognize Harvard University’s continuing commitment to that future,” she said. “This is the partnership we’ll need to continue if we are to remain the preeminent military force in the world.”