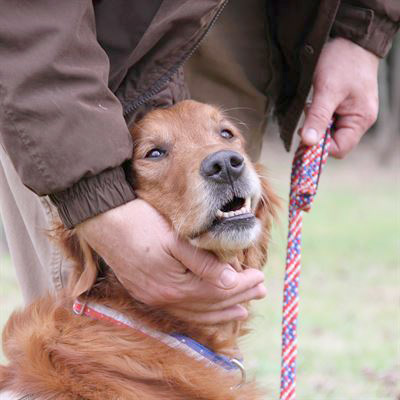 Huff, a golden retriever, gets praise for retrieving his leash and giving it to Rick Yount, executive director of the Warrior Canine Connection, a nonprofit organization in Brookeville, Md., that works with dogs in service training and with service members who have post-traumatic stress disorder or traumatic brain injury while they are undergoing treatment at the National Intrepid Center of Excellence in Bethesda, Md. Military physicians involved in the effort to diagnose and treat those service members updated a Senate panel on their progress, April 20, 2016.

While significant progress has been made in diagnosing and treating post-traumatic stress disorder and traumatic brain injuries from a decade and a half of the Iraq and Afghanistan wars, challenges remain for the wounded and their families, two military physicians involved in the effort told a Senate panel last week.

More than a quarter of U.S. service members last year were treated for psychological conditions and traumatic brain injuries that often are combined with substance use and pain disorders, Navy Capt. (Dr.) Michael Colston, director of the Defense Centers of Excellence for Psychological Health and Traumatic Brain Injury, said.

Colston and Greenhalgh talked about the necessity of continued medical research into PTSD and TBI diagnoses and treatment along with DOD’s partnerships with medical academia, federal departments such as the Department of Veterans Affairs and private institutions.

One such collaboration created an integrated TBI care network in the last year, when NICoE joined the Walter Reed command structure on the Bethesda campus, which Greenhalgh called an important component of the Military Health System’s TBI “pathway of care.”

The integrated approach leverages the expertise and  resources of Walter Reed’s outpatient TBI programs, inpatient consultations and the university’s research capabilities, he added, which helps to serve a unique patient population.

“We reduced barriers to care,” he said, including a stigma attached to seeking treatment or care. “We expanded access to care by tripling the size of our mental health infrastructure,” he added. “We improved transition points in the continuum of care, and we improved our system’s ability to treat the sickest patients.”

While PTSD treatment has a wide evidence base that supports using therapy and medication regardless of the trauma the service member experienced, Colston noted, “we nonetheless face challenges in how best to structure our health system to support those interventions. Health systems research is imperative,” he said.

“With your continued support, I’m confident our discoveries will bear fruit in the years ahead,” Colston told the senators.