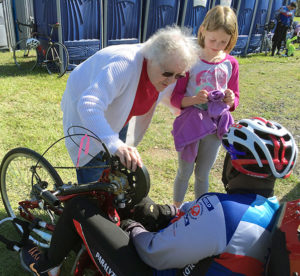 Virginia Wantz and her granddaughter, Autumn Schaffer, thank medically retired Army Sgt. 1st Class Carl Morgan for his military service at a rest stop in Pennsylvania during the World T.E.A.M.’s Face of America ride, April 24, 2016. More than 700 cyclists, 175 of them disabled veterans, rode 110 to 120 miles from either Arlington, Va., or Valley Forge, Penn., to Gettysburg over two days.

More than 700 cyclists, including nearly 175 disabled veterans, rode two routes — either 110 miles from Arlington, Va., or 120 miles from Valley Forge, Penn., — and met up in Gettysburg, Penn., as part of World T.E.A.M. Sports’ annual “Face of America” ride.

The cyclists dealt with a bit of cold rain the first day and had a few injuries and mechanical issues, but the sun came out, and they had nice weather for the Gettysburg finish.

The ride is one of the largest annual noncompetitive bicycle rides in the national capital region. It gives veterans of all eras from all over the nation with various disabilities a chance to meet up, make new friends and share resources.

For Bill Czyzewski, an Army Vietnam veteran who served with the 11th Armored Cavalry Regiment as a tank loader, cycling became his rehabilitation for his post-traumatic stress.

“I’ve been riding the past six years, and I couldn’t believe how much the PTSD went away after I started riding a bike for the first time,” he said. “It was amazing.”

Czyzewski was shot March 1, 1970, seven months after his arrival in Vietnam. He lost his left leg seven years later. He said World T.E.A.M. Sports encouraged him to do a 60-mile ride. Then he did the Face of America ride, he said, and then the next year, he went cross-country.

“We put our back tires in the San Francisco Bay, came across the Golden Gate Bridge and came right across the middle of the country,” he said. “We left May 28 and got to Virginia Beach on July 28. It took us two months.”

He said he loves participating in the Face of America ride because now he can help younger veterans with their PTSD.

For former Army Sgt. Albert Gonzalez, who served as a field artillery specialist and has PTSD from his time in Iraq from 2004 to 2005, riding his recumbent bike gives him clarity. “Riding a recumbent is a lot different than riding an upright bike,” he said. “It’s like being in a convertible on a country road. I’m just with my Christian music, and I’m at peace the whole time.” 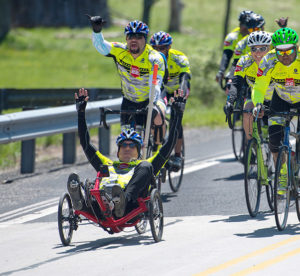 Retired Army Sgt. Albert Gonzalez sets pace for the Rescue 22 team during the Face of America bike ride in Gettysburg, Pa., April 24, 2016. More than 150 disabled veteran cyclists were paired amongst 600 able-bodied cyclists to ride 110 miles from Arlington, Va., to Gettysburg over two days in honor of veterans and military members.

He said he dedicated his Face of America ride to a fellow San Antonio police department worker who recently took his life. Gonzalez was riding with Team Rescue 22 in memory of the 22 veterans who take their lives each day.

Gonzalez said he rides with Face of America for the camaraderie.

“This is my third year doing it, and I come for all of the camaraderie, the brotherhood, all the support and everything you get from Face of America,” he said. “Being out here with all of my brothers and my friends and new friends that we meet out here, it really means a lot. It’s something I plan my vacation time around every year.”

He said he also enjoys hearing the stories from veterans from other eras.

“It’s great to ride with everybody and to hear the different stories from World War II to Korea to Vietnam, to us telling our stories about Iraq to them,” he said. “They learn about us, and we learn about them, the differences in how they were treated and how we’re treated. It’s a great experience, and it’s something that we all share together.”

Carl Morgan, a medically retired Army sergeant first class computer specialist and observer controller who has a spinal cord injury, said he also enjoys riding alongside veterans of all eras.

“I’ve met some World War II vets out here on some rides, so it’s just phenomenal to meet all of the great history,” he said. “You get some stories out here, and you can see all sides. We all fought for the same cause. It’s great.”

“The opportunity to come out here and see the countryside, this is what we fought for, and to get a good look at it firsthand, it’s great. It’s a great ride,” he said. 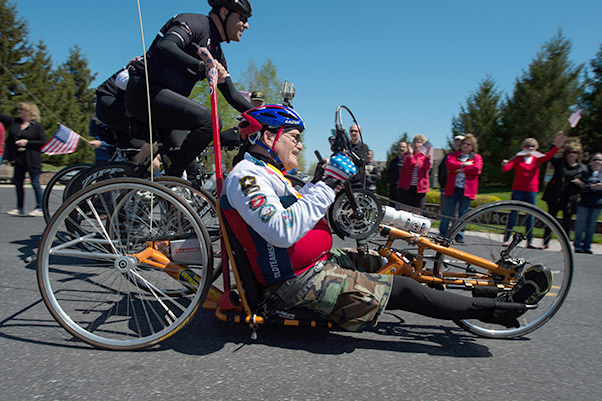 Vietnam War Army veteran Bill Czyzewski rides a recumbent bicycle to the applause of a crowd in Gettysburg, Penn., April 24, 2016. More than 150 disabled veteran cyclists were paired amongst 600 able-bodied cyclists to ride 110 miles from Arlington, Va., to Gettysburg over two days in honor of veterans and military members.

The riders stopped every 10 to 20 miles along the way for 20-minute breaks and received snacks and cheers from volunteers and community members.
Autumn Schaffer, 8, daughter of Nathan Schaffer, who served in the Army in Afghanistan and Iraq, and her grandmother, Virginia Wantz, stopped by to thank the veterans with their church group at one of the stops in Pennsylvania.

“I think it’s really cool that they can still ride bikes,” Schaffer said.

“We wouldn’t be here if it weren’t for them fighting for our country and serving our country,” Wantz said. “We’re out here to salute them and tell them we appreciate their service.”

Jose Santiago, A former Army corporal combat medic who has PTSD from his time in Iraq from 2003 to 2004 and a traumatic brain injury, leads a team of about 50 cyclists — 25 percent of them are from Puerto Rico. He said Face of America is like a family reunion, and that he has seen the impact rides like Face of America has had on some of his riders.

“Last year, we had a veteran here, he had so much rage, and ever since he’s been riding, his whole attitude has been changing,” Santiago said. “His wife said, ‘When he doesn’t ride, I can see the attitude. I tell him, “You need to go ride.”’ That’s pretty neat.’”

Medically retired Army Sgt. Norberto Roman, a cargo specialist with PTSD and chronic bronchitis from deployments to Iraq from 2003 to 2004 and from 2004 to 2005 had a special mission this year. He led a Rescue 22 team on a memorial ride. Each of his riders who were veterans from each branch of the military wore a photo of a service member who had taken his or her life.

He said they also didn’t leave anyone behind on the ride.

“When we start pedaling, if we see someone struggling on a hill, we help push,” Roman said. “It’s amazing being able to come on a weekend like this from all parts of the U.S. and people from Puerto Rico and just being one. It’s not about being Army, Navy, Air Force, Marines or Coast Guard. It’s about the armed forces — brothers and sisters pushing each other just to cross that finish line to get the job done.”

Medically retired Navy Petty Officer 1st Class Jerry Padgett II, a search and rescue emergency medical technician, has a spinal injury and TBI from an improvised explosive device blast in Afghanistan. He encourages any veterans who may be considering participating in Face of America to give it a try. 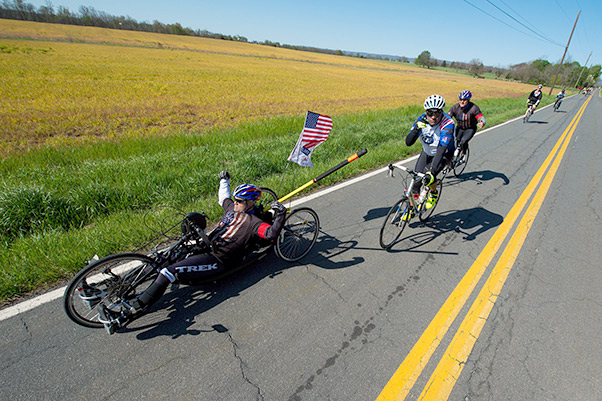 Retired Navy Petty Officer 1st Class Jerry Padgett II, front, sets a pace for his team during the Face of America bike ride in Gettysburg, Pa., April 24, 2016. More than 150 disabled veteran cyclists were paired among 600 able-bodied cyclists to ride 110 miles from Arlington, Va., to Gettysburg over two days in honor of veterans and military members.

“If not FOA, go out to your local park and recs and find out if they have any adaptive sports,” he said. “You just have to make the effort and know that you’re not alone and to connect. The only one true disability in life is the lack of communication. I was told I wouldn’t walk and talk again, but I’m talking.

“One day,” he continued, “I had a plan to go on that lonely walk, but my neighbor out of nowhere gave me a hug and said, ‘Hey, how are you doing?’ I looked at him and said, ‘Why did you do that?’ He said, ‘You looked like you needed a hug.’ I said, ‘I did.’ You never know what kind of battle somebody come out of, civilian or military. But finding teams at Face of America like Warriors4Life will hold you until eventually, you’re able to hold someone else.”

“Get out and try it; it could change your life,” he said. “Just get out here and get around other people who understand what you’re going through. You meet so many people who are going through some of the similar things [in] that day-to-day mental battle. Get out there and start doing some stuff. It’s great.”