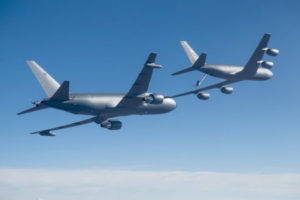 The KC-46A program’s first test aircraft, EMD-1, conducts tests of aircraft acceleration and vibration exposure while flying in receiver formation at various speeds and altitudes behind the KC-135 Stratotanker. (

The KC-135s, which currently serve as the backbone of the air refueling fleet, provided refueling support to receiver and chase aircraft participating in the KC-46A test program, said one of the crewmembers on the flight. The 22nd Air Refueling Wing crew also acted as a contingency plan refueler in case of any mission difficulties.

Since the KC-46A is not yet cleared as a refueler, the KC-135’s presence is crucial in allowing receiver and chase aircraft to be refueled, thereby extending the amount of times they can stay in the air and participate in testing.

“We were flying all different formation positions to check out the plane,” said Capt. Alex Durstein, a 344th Air Refueling Squadron instructor pilot. “I valued the experience to see the new aircraft and be on a mission that was directly supporting getting the aircraft out in the field.”

Before being cleared for operation, each receiver aircraft must be tested for the effects of wake turbulence while approaching and being refueled by the KC-46A, Durstein said. The testing consists of the receiver aircraft approaching the KC-46A at varying speeds and distances from the boom to ensure it is operating within specifications.

“When we weren’t flying, we were on cockpit alert status as a backup,” said Maj. Jason Barry, a 350th ARS instructor evaluator pilot. “We watched all the testing that was done while in formation, listening on the radio to directives and refueling both aircraft as they needed it.”

As part of on-going testing, the KC-46A test aircraft are flying out of Boeing Field in Seattle. The KC-135 and McConnell aircrew met up with the KC-46A and receiver aircraft mid-mission over Washington and set up two miles in trail or waited in orbit during frequent altitude changes to refuel the chase aircraft, Durstein said.

The KC-46A is equipped with advanced electronic displays and controls for improved system performance, Barry said.

“It is truly a very capable and advanced aircraft,” Durstein said. “They were testing it in air refueling benchmarks, which we do not typically do in the KC-135. (The KC-46A) will allow us to perform more aerial refueling missions within a restricted air space with more varied altitudes.”

The KC-46A will join the KC-135 tanker mission in worldwide aerial refueling operations, with the first main operating base being McConnell AFB. The first KC-46A is currently scheduled to arrive here in spring 2017.