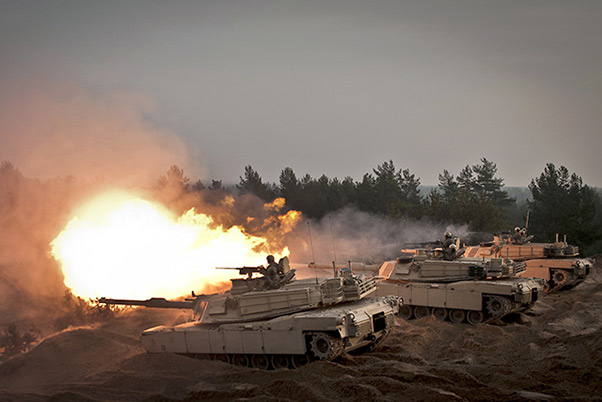 Resetting the theater
Until 2014, units in the European theater had spent a decade focusing on supporting other geographic combatant commands by projecting power and sustaining combat forces deployed in other regions. But Russia’s 2014 invasion of the Crimean Peninsula and its resurgence as a threat has affected NATO, Europe, and the United States in a manner not seen since the fall of the Berlin Wall.
In response, the Department of the Army, the Army Materiel Command, USAREUR, and the 21st Theater Sustainment Command have focused on resetting the theater. This is an ongoing task accomplished through numerous initiatives, such as leveraging regionally aligned forces (RAF) and integrating European activity set equipment.
To prepare for these initiatives, the Department of Defense, on Jan. 26, 2012, outlined a new defense strategy that included a smaller and more expeditionary Army and a BCT aligned with each geographic combatant command. This strategy inactivated two forward-stationed heavy BCTs and allocated a brigade stationed in the United States to the NATO Response Force.
In July 2012, the Army chief of staff approved the EAS for rotational forces. The EAS consists of a modernized combined arms battalion, enablers, and associated support equipment. The purpose of this set is three-fold: to mitigate the loss of the two BCTs, to meet the chief of staff’s intent to have stateside forces train in a multinational environment, and to reinvigorate U.S. participation in the NRF.

The evolution of RAF
In 2013, the 1st BCT, 1st Cavalry Division, was designated as the European Rotational Force and the Army’s contribution to the NRF. Battalion-sized maneuver forces were scheduled to execute two 60-day European rotations per year. This plan, coupled with the chief of staff of the Army’s approval for the EAS, meant that heavy armor and maneuver formations would return to Europe.
In January 2014, the first M1A2 system enhanced package version 2 Abrams tank arrived in Germany as part of the newly designated EAS. Just eight months after the 21st TSC prepped the final M1A1 Abrams for retrograde out of Germany, tanks carried on commercial barges returned to German soil.
The 1st BCT, 1st Cavalry Division, was replaced by the 1st Armored Brigade Combat Team, 3rd Infantry Division (1/3 ABCT). Shortly after that, the 4th Infantry Division established a forward mission command element in Germany to provide a division-level operational mission command structure for USAREUR.
The RAF allowed USAREUR to expand its Atlantic Resolve mission from two organically assigned BCTs into a division headquarters providing mission command for three BCTs and other enabling units. This successful integration of RAF in Europe transformed operations and changed the methods U.S. units use to train internally and with multinational partners. RAF units are also no longer just aligned to Europe; they are now effectively allocated and critical to strengthening the collective defense of NATO.

Developing the EAS for RAF
To demonstrate the Army’s power projection capability and to address this challenge, USAREUR began leveraging continental United States-based RAF. To support those forces, it deployed EAS equipment across Europe. As heavy armor and other equipment returned to Germany, the complexity of preparing equipment for receipt, storage, maintenance, and issue had to be conquered quickly. The 405th Army Field Support Brigade (AFSB) used facilities in Grafenwoehr, Germany, to receive and store the initial combined arms battalion (CAB) set of equipment. Planners from AMC, the Army Sustainment Command (ASC), USAREUR, the 21st TSC, and the 405th AFSB came together to expedite EAS planning efforts.
In April 2014, a rotational battalion from the 1st BCT, 1st Cavalry Division, successfully received a CAB set of tanks, infantry fighting vehicles, and other military equipment in time to participate in the multinational exercise Combined Resolve II.
Starting off as a single CAB set of equipment, the EAS quickly doubled in size and eventually expanded into a full ABCT equipment set. This rapid expansion led to a small logistics miracle. Two days prior to the scheduled return of Mannheim’s Coleman Barracks to the government of Germany, the United States was granted permission to retain the location as a temporary site for EAS storage. The Coleman Worksite serves as the staging and reception point for the second and third CABs’ equipment.

Moving the EAS forward
Assuring NATO allies and deterring Russian aggression are key components to current operations in Europe. Expanding operations outside of Germany and deeper into Eastern Europe is crucial to these efforts.
When 1/3 ABCT returned to Germany in September 2015 and drew EAS equipment ahead of its three-month RAF rotation, it drew equipment from EAS sites in Grafenwoehr and Mannheim. From there, equipment was transported by truck, rail, barge, ferry, and aircraft to multiple training areas across the Atlantic Resolve area of operations (AO). At the conclusion of 1/3 ABCT’s rotation in December 2015, the unit not only returned equipment to the EAS sites in Grafenwoehr and Mannheim, but it also sent equipment to three new forward sites in Lithuania, Romania, and Bulgaria.
Planning is underway to further expand EAS sites to additional locations in the Atlantic Resolve AO this year. The sites will operate as a hub-and-spoke network in an effort to balance efficiencies and effectiveness with capabilities and capacities.
A network of linked regional logistics nodes, cooperative security locations, and forward EAS sites will support U.S. formations training across eight NATO allied countries. While the exact number and locations of enduring sites has not been finalized, the forward EAS locations will allow units to draw equipment closer to their training areas, saving transportation time and cost while maximizing their training time with multinational partners.

Challenges to RAF, EAS
Resetting the European theater and sustaining RAF operations in 2016 and beyond present challenges that did not exist two years ago. These challenges include setting a theater, providing strategic agility to the joint force, maintaining freedom of movement during sustained high-tempo operations, and addressing new maintenance concerns associated with the new theater.

* Setting the theater: The Atlantic Resolve AO encompasses former Soviet bloc nations. In many areas, road networks and infrastructure have not been touched since the collapse of the Soviet Union.

* Engineers from the 21st TSC’s 18th Military Police Brigade, in coordination with USAREUR engineers and experts from the Military Surface Deployment and Distribution Command, have been conducting route assessments across eight countries over the past 18 months. These experts have been testing and classifying hundreds of bridges and thousands of miles of roadways to improve movement throughout the Atlantic Resolve AO. They are also verifying tunnel dimensions to determine clearance restrictions for transporting EAS equipment on trucks and by rail.

* The Military Surface Deployment and Distribution Command and the U.S. Transportation Command are also assessing and verifying the capabilities and capacities of multiple logistics nodes across Europe. Because of USAREUR’s proximity to Russia’s robust anti-access/area-denial systems, planners must consider the feasibility of using ports and logistics nodes located beyond current locations. Analyzing new node suitability and facilitating the establishment of political and military support agreements are fundamental to resetting the new European theater.

* Maintaining freedom of movement: RAF rotations put more strain on vehicle fleets than combat training center rotations do. Vehicles and platforms operate in sometimes unforgiving conditions for periods exceeding two months and cover great distances between training areas.
Dedicated maintenance competes with continuous operations. Heel-to-toe rotations and split-based operations (for example, simultaneous training stateside and in Europe) require echelons-above-brigade level sustainment units to provide year-round support to an AO while the maneuver forces move into and out of the area on a rotational basis.

Forces in Europe no longer operate in the confines of training areas located throughout the former West Germany. Persistent operations occur from the Atlantic Ocean to the Russian border and throughout the Atlantic Resolve AO (from the Baltic Sea to the Black Sea). The distribution and in-transit visibility networks required to support this vast AO must continuously adapt and mature.

Convoys routinely travel distances in excess of 1,300 miles (one way) to deliver multiple classes of supply. These same convoys also cross several international borders during the course of a single mission. When transporting war materiel, diplomatic clearances are required anytime international borders are crossed, and the time lines and requirements for these clearances vary from nation to nation.

Speed matters when it comes to resupply and response to extant threats. Therefore, decreasing the time and length of the lines of supply remains a focal point for NATO planners.

* Maintenance: Atlantic Resolve exercises often require maneuver units to operate in company- and troop-sized formations and disperse one unit per country across Eastern Europe. At the same time, they are typically 1,000 miles from main logistics nodes in Germany. These dispersed exercises have led to distributed logistics and maintenance operations.

Properly diagnosing equipment faults has become the primary obstacle to maintaining consistently high operational readiness rates. When a battalion or squadron is dispersed across multiple countries, it becomes important for vehicle operators and crews to properly diagnose their own equipment faults. This is because battalion maintenance officers, maintenance technicians, and specialty diagnostic kits and tools are finite.

The European Agreement concerning the International Carriage of Dangerous Goods by Road, commonly referred to as the ADR, governs dangerous goods transport in Europe. For U.S. military vehicles operating on European roads, this means vehicles must have proper ADR kits installed and certified before they can legally transport dangerous goods such as class III (petroleum, oils, and lubricants) and class V (ammunition).

As the Atlantic Resolve AO expands and EAS equipment multiplies, so does the need to outfit and certify vehicles for ADR compliance. Members from the TACOM Life Cycle Management Command were brought into the ADR kit procurement process because the kits are nonstandard equipment. They quickly developed resourcing solutions, and many of the kits now have designated national stock numbers for ordering.

The 21st TSC’s Theater Logistics Support Center-Europe also began to produce a series of ADR installation videos in order to allow unit-level maintainers to install ADR kits on their fleets. Procurement, installation and certification of kits and vehicles are ongoing, but organizations from across the Army have come together to improve fleet readiness and allow for expanded freedom of movement in Europe.

Enablers such as RAF and the EAS allow Europe-based forces to generate and sustain readiness in a region filled with uncertainty and growing complexity. In April 2016, an EAS was issued to RAF for the fifth time. The equipment issue signals another change; RAF units will now deploy to Europe for six months instead of three.

Having RAF six-month rotations, multiple forward EAS sites conducting hub-and-spoke operations, and dispersed logistics will continue to challenge operators and logistics planners inside and outside of Europe. These and numerous other variables are contributing to the complexity of assuring allies, deterring aggression, and resetting a new European theater.

Editor’s note: Maj. Craig A. Daniel works in the Commander’s Initiatives Group for the 21st Theater Sustainment Command in Kaiserslautern, Germany. He has a bachelor’s degree in criminal justice from Radford University. He is a graduate of the Quartermaster Officer Basic Course, the Combined Logistics Captains Career Course, and the Army Command and General Staff College. Robin T. Dothager is the War Reserves Branch chief for the 405th Army Field Support Brigade in Kaiserslautern, Germany. He is a former Army noncommissioned officer who held occupational specialties in both ground vehicle maintenance and supply. He is a member of the Army Civilian Corps and a multifunctional logistician specializing in Army pre-positioned stocks operations.