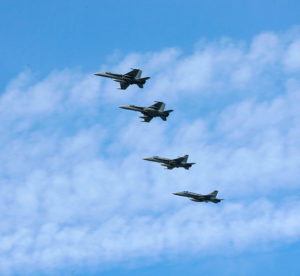 For two weeks, the skies over the Point Mugu Sea Range off the coast of Southern California echoed with the sound of jets as Air Test and Evaluation Squadron (VX) 31 took over the airspace with a Large Force Exercise intended to test and validate new software configuration sets for the F/A-18 and EA-18G aircraft series April 18-29.

“H12 brings more than 35 capabilities to the fleet,” said. Cmdr. Kevin McGee, the Advanced Weapons Laboratory’s military deputy and VX-31 officer in charge during their detachment at Point Mugu, “most notably a complete redesign of the way information is displayed to aircrew.”

When testing new SCSs, the squadron generally tries to participate in two large exercises as part of the validation process; one at the beginning and one in the final validation phase.

“Our standard LFEs did not align with our schedule,” McGee explained. “We couldn’t wait until [the next one in] June to conduct these tests.”
Coming to Point Mugu was a bit of a blessing in disguise, too.

“Here, we have the opportunity to drive scenarios that specifically test our functionality, where in a normal LFE, the strike plan does not take into account our test objectives,” McGee said.

“The test period went very well, much better than we could have hoped for,” McGee said. “We accomplished all of our planned missions except for one; we lost an event due to sea states on the range.” 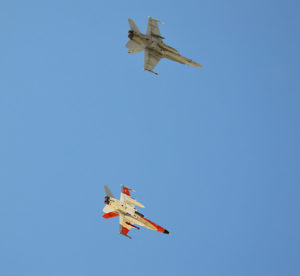 Aircraft from VX-31 and VFA-15 in the break over Point Mugu, Calif., during a large force exercise held April 18-29.

VX-31 led the exercise, with participation from VX-9, also from China Lake; VX-20 and VX-23 from Patuxent River, Md.; and Strike Fighter Squadron 15 from Naval Air Station Oceana in Virginia. Contract support from Airborne Tactical Advantage Company and Omega Air refueling was also used, and QF-4 target aircraft from Holloman Air Force Base in New Mexico arrived for flights during the second week of testing.

Such a diverse — and large — group of aircraft operating simultaneously was a challenge to plan and manage, and not just for VX-31. Sea Range managers and operators were tested as well.

“Keeping things safe without interfering with the exercise itself is a challenge,” said Chris May, chief scientist and range transition lead. “We are used to very scripted and structured actions, and this event needed more flexibility.”

Another oddity for the range: giving over range control to an asset on the range. During the exercise, E-2D aircraft served as controllers, as they would during a real-life event.

Billy Wilson, Sea Range Test Management Branch head, noted that another issue is the sheer volume of aircraft launching and returning at once. On some days, more than 30 aircraft were airborne at one time.

“The sheer quantity is something we’ve not seen here in a long time,” he said. “It’s difficult, but we’re here to support the fleet, and we’re up to the challenge.”