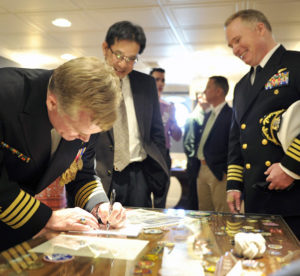 Capt. Richard McCormack signs a program for a distinguished guest before Pre-Commissioning Unit Gerald R. Ford’s (CVN 78) change of command in the ship’s hanger bay. Ford is the first of a new class of aircraft carriers currently under construction by Huntington Ingalls Newport News Shipbuilding.

“I will forever be a Gerald R. Ford sailor,” said Meier. “What a great opportunity it has been, commanding you all for the past 33 months. Ford Sailors are leading the way.”

Meier, who became the ship’s first commanding officer in 2013, said he considered building the crew his top priority.

“When you build a crew from scratch, it does not come with a blueprint,” said Meier as he thanked the crew for their resilience, initiative and integrity. He added the thing he would miss the most was “sitting down personally with every sailor and getting to know them.”

Rear Adm. John Haley, commander of Naval Air Forces Atlantic, awarded Meier the Legion of Merit on behalf of the president for displaying exceptionally meritorious conduct in the performance of outstanding service from July 2013 to April 2016.

Command Master Chief Donnie Novak presented Meier with a charge book and anchors in recognition of his appointment as an honorary chief petty officer for his dedication to Sailors throughout his career.

“Having a commanding officer be appointed an honorary chief petty officer by the master chief petty officer of the Navy is extremely rare,” said Novak. “Captain Meier’s dedication to excellence and fair treatment to our sailors is why he is considered part of the chief family.”

McCormack addressed the crew for the first time as their commanding officer, and said it is a great honor to be chosen to lead them through several notable milestones, including turn ship, sea trials, delivery and commissioning.

“Our countrymen are in good hands and it truly is an honor to command you all,” said McCormack. “Sailors are the heart and soul of the ship. I am truly fortunate to follow a leader who exemplifies integrity at the helm.”

McCormack is a 1990 graduate of the U.S. Naval Academy, and a graduate of the U.S. Navy Test Pilot School, the NATO Defense College, and the Joint Forces Staff College. His operational tours include VFA-131 as a division officer and landing signal officer, and VFA-146 as a department head. Most recently, he commanded VFA-86 and USS Blue Ridge (LCC 19), and served as executive officer of USS George H.W. Bush (CVN 77).

“Captain McCormack, I now place my dad’s namesake in your hands,” said Susan Ford Bales, daughter of President Ford, ship sponsor and guest speaker. “You are entrusted with the greatest responsibility of commanding the United States’ sons and daughters.”