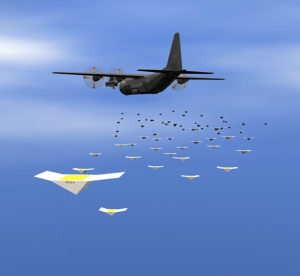 By 2025, airspace over future battlefields will be extremely congested, as well as dangerous. That’s one of several significant outcomes that came out of experiments conducted recently, said Col. Wayne Grieme.

Lots of stuff flying around
Since the next fight will be a joint undertaking, participants in the experiments included personnel of the other services who brought their own capabilities to the fight, each utilizing the air, as well as the other domains, Grieme said. Things flying through the air domain would include:

As new technologies for unmanned aircraft systems becomes less costly and readily available, even non-state actors would be able to afford them, Grieme said. Operating in this domain would present some real challenges to pilots and UAS, he said.

Signals in the air
Adding to this clutter of aircraft and projectiles in the air would be electronic signals used for cyber and electronic warfare, Grieme said. Cyber offensive and defensive capabilities are also becoming readily available to adversaries, both state and non-state. These pose significant challenges.

Dr. Van Brewer, chief scientist, JAED, said that land, sea, cyber and other domains were also involved in the experiments, not just air.
The experiment’s outcome pointed to the importance of training with joint and multinational partners, Brewer said.

Lt. Col. Chris Matherne, Experimentation Branch chief, JAED, said that what struck him about the experiment was the lethality potential adversaries’ current weapons systems pose in the fight, not just their likely future capabilities. 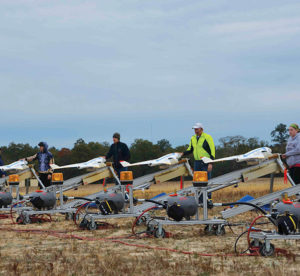 Representatives from the Georgia Tech Research Institute, in partnership with the Maneuver Center of Excellence, test unmanned aerial vehicles to operate as a swarm at Lee Field, Fort Benning, Georgia, Dec. 16, 2015.

About the experiment
Brewer said that while details of the scenarios used in the experiment are classified, they did involve a late, forced-entry with major combat operations against a hybrid threat from state and non-state actors, all fully capable across all domains.

Experimenters from 11 centers of excellence battle laboratories, as well as U.S. Army Special Operations Command, employed simulation on a closed network to examine the force size that would be needed, materiel requirements and optimal structure of division, corps and theater, Brewer said.
Role playing was “very interactive” and moderators and facilitators helped lead discussions that followed, Grieme said.

About 1,500 pages of outcome data were developed, analyzed, and that information has been given to senior Army leaders to inform doctrine, science, research and development requirements and investments, he said.

This fall, Unified Challenge 16.2 will take place, Grieme said. It will also be a simulation exercise.

While Unified Challenge looks at the force of 2025-2030, TRADOC also conducts experiments known as Unified Quest that look at the 2030-2050 timeframe.

Grieme concluded that these and other experiments produce good analytics that are shared across the joint force.

He added: “Thinking about the future fight takes a lot of reading, learning and interacting. It’s already a very complex world and it will continue to get more complex. We’re ready to accept the challenge and we’re excited about being part of it.”