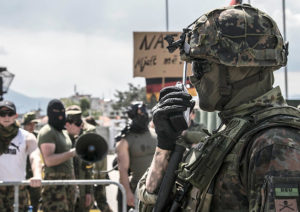 A German soldier calls in reinforcements as a group of angry protestors taunt the German Armed Forces during Operation Sharp Griffin held on Camp Prizren, Kosovo, May 7.

The multinational exercise was conducted over a 36-hour timeframe and centered on multiple complex situations, such as; air infiltration and evacuation operations, platoon level movements, live fire maneuvers, crowd riot control techniques, as well as synchronized coordination of operational forces between the German and U.S. forces. The German soldiers partnered with members of the 2nd Infantry Brigade Combat Team, 28th Infantry Division and 1st Battalion, 41st Infantry Regiment, throughout the operation.

The two day operation started at Orahovac Range, in Kosovo, where German soldiers penetrated the site thanks to the help of UH-60 Black Hawks. From there the teams received a short mission brief before engaging a group of targets. After each simulated enemy was eliminated, the Soldiers were air evacuated, once again, by UH-60 Black Hawks.

For the mechanized infantry battalion soldiers, refining their tactical abilities was less about their mission in Kosovo and more about honing their abilities as German soldiers.

“As third responders it’s unlikely we will be forced to use the skills we achieved today, but, I think it’s one of the skills every soldiers needs to have,” said Maj. Oliver John Steenson-Schulz, day one event coordinator. “On one hand we use this as training for the Soldiers, and of course we hope it never comes to it but if we needed we can use the skills here in Kosovo if asked to.” 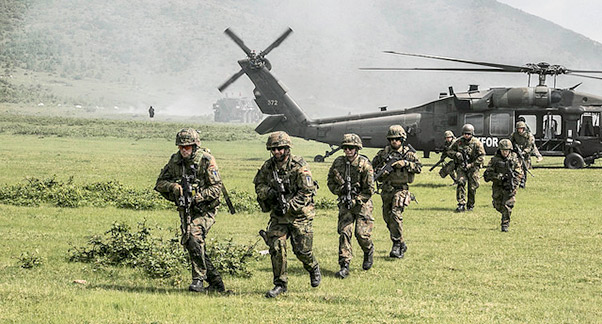 German soldiers operating under Multinational Battle Group-East conduct an air infiltration exercise as part of a larger two-day operation deemed Operation Sharp Griffin, May 6, on Orahovac Range in Kosovo. During day one of the two day event, the German contingent perfected their joint maneuver and air assault techniques.

Day two of the exercise reflected more of the peace support operations the German soldiers are used to conducting here in Kosovo, as the contingent responded to protestors who gathered at the three of the camp’s gates.

As their aggression heightened, the escalation of force, used to handle the disgruntled crowd, did as well. Additional German troops were called in for reinforcement, while soldiers from the 1st Battalion, 41st Infantry Regiment arrived on scene to serve as a reserve force.

It did not take long for the angry mob of protestors to disband, once the support elements arrived. With a safe and secure environment and freedom of movement restored, the multinational team returned to their camp knowing they had successfully completed the mission. 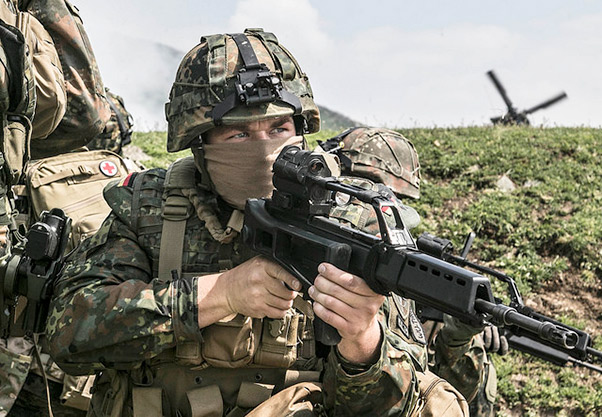 A German soldier serving with the Multinational Battle Group-East and Kosovo Force, pulls security for his squad during Operation Sharp Griffin May 6, on Orahovac Range in Kosovo.

“This exercise was more to force our staff members to make decisions, to go through their military decision making process and make the best decision,” said German Lt. Matti Hybenkvist, German liaison officer for the German mechanized infantry battalion. “What we needed to do to succeed at the company level was to show we could use the different tactical techniques we have been learning. From what I have seen it worked really well and was a job well done.”

Although the overall mission was a success, the MNBG-E soldiers don’t plan on slowing down on training and instead have set their sights on an even bigger training exercise later this year. 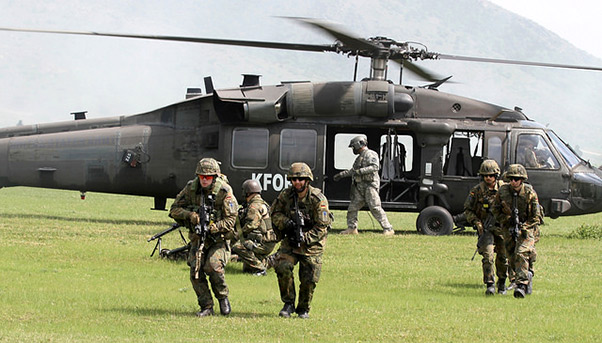 German soldiers operating under Multinational Battle Group-East conduct an air infiltration as part of a larger two-day exercise deemed Operation Sharp Griffin, May 6, on Orahovac Range in Kosovo. During day one of the two day event, the German contingent perfected their joint maneuver and air assault techniques.