A Gray Eagle unmanned aircraft vehicle prepares for takeoff from Dugway’s Michael Army Airfield. The Ground Based Sense And Avoid system was recently tested at Dugway by putting two Gray Eagles on a collision course. At stake was approximately $42 million. The operator of the Gray Eagle using the GBSAA service received ample warning, and maintained more than a nautical mile from the intruder.

A radar-based system tested at Dugway will soon allow military operators of unmanned aerial vehicles to fly within the National Airspace System to help maintain their skills.

The Ground Based Sense And Avoid is the first and only system that meets federal requirements that aircraft operators see and avoid other aircraft, according to John Innes. “The GBSAA has been tested at Dugway since 2012,” said test lead Innes. Dugway testing is conducted by the Army’s Project Manager, Unmanned Aircraft Systems of Redstone Arsenal, Ala.

Until the GBSAA was created, flying unmanned aircraft within the NAS required a chase plane or ground observer. The new system eliminates that requirement by not only accurately displaying other aircraft near the unmanned craft, but notifying its operator of potential hazards. Developers will return to Dugway this fall to complete the final portion of the last test, and do one full test. Continued testing at Dugway is expected as issues and changes within GBSAA are developed or explored, according to Innes. 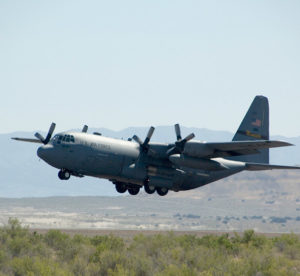 The GBSAA system was created solely for the military, to allow operators of Unmanned Aircraft Systems, or UAS – the military term for remotely controlled aircraft – to fly safely within the NAS without lookouts. There are no commercial plans for GBSAA, Innes said. One of the most complex aviation jurisdictions in the world, the NAS includes the airspace, airports and navigation facilities of the U.S. and portions of the world’s oceans. In the contiguous United States, military UAS operators must often enter the NAS to get to other military training sites or installations.

“Today, there is a growing list of UAS units in the states, returned from combat deployments, that need to safely maintain their skills,” Innes said. “The GBSAA will provide that ability to fly within the National Airspace System.”

Data input to the GBSAA Traffic Display comes from ground-based radar, and on-board aircraft transmitters that broadcast position. To ensure accuracy, data from three separate radars are fused together and continually compared to data from the aircraft. A human Ground Based Operator — a former pilot or air traffic controller — monitors the Traffic Display for system health, warnings and aircraft positions. A separate Alert Display provides a similar picture, and notifies the GBO of potential aircraft conflicts monitored by the GBSAA system. The GBO, at an on-ground work station, communicates directly with the aircraft operator.

The Traffic Display exhibits a series of concentric rings, indicating distances of 2, 4 and 6 miles outward, with the operator’s UAS in the center. Aircraft within the 4-mile ring, whose trajectory project a threat, are yellow-tagged and prioritized on the Alert Display, according to the threat they present the UAS receiving GBSAA services. At the 2-mile ring, if the threat increases, the tag becomes red, alarms sound and the Alert Display becomes more urgent. 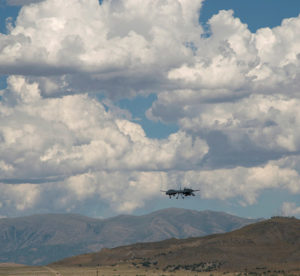 With the Ground Based Sense And Avoid system, the pilots of unmanned craft like this Gray Eagle meet the federal requirement to “see and avoid” other aircraft when flying within the National Airspace System. Without it, a chase plane or ground observer is required. The GBSAA system will make it easier for operators to maintain training, keeping their skills honed.

“The warning system allows, at the minimum, one minute to take corrective action,” Innes said. “In actual practice, operators would have longer time to take action.”

The human GBO and UAS operators are highly experienced, and the GBSAA system contains every conceivable scenario to recognize potential threats, Innes noted. Developers expect the next generation of GBSAA to verbally warn UAS operators, and suggest how to avoid near midair collisions.

Four years ago, the GBSAA was tested by flying two Shadow UAS on a collision course, Innes said. It recognized the threat and notified the Shadow operator receiving GBSAA services, who diverted the craft within ample time. Recently, the same test was conducted with two Gray Eagles (at stake, at least $42 million). Again, GBSAA warned the operator and the Gray Eagle receiving GBSAA services maintained more than one nautical mile of separation from the intruder.

While the system may seem complicated, learning to provide GBSAA services to a UAS operator requires two weeks of training for pilots and air traffic controllers, Innes said. For a realistic student experience, air traffic around the busy Boston NAS was recorded. An engineer but not a pilot, Innes said he tried the recorded scenario and, with the assistance of a GBO, navigated his mock UAS without incident.

Dugway abuts the Air Force’s massive Utah Test & Training Range, where pilots train and weapons systems are tested. Together, Dugway and the UTTR offer 16,797 square miles of airspace, with 7,954 square miles restricted up to 58,000 feet. Dugway’s Michael Army Airfield was modernized in 2004. In 2009, the Rapid Integration and Acceptance Center, commanded by PM UAS in Alabama, became a tenant unit to streamline the testing of UAS improvements. With ample space, a modern airfield and experienced UAS support, Dugway offers a perfect fit for testing the GBSAA system. 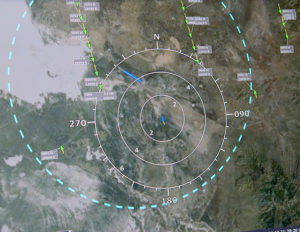 How the Ground Based Sense And Avoid system appears onscreen, to the unmanned vehicle operator. The blue outer ring is the Operational Volume, a buffer. Within it are three rings indicating 6, 4 and 2 miles from the operator’s unmanned craft at the center (blue arrow). The green dashed lines ending in arrows are other approaching aircraft. An Alert Display next to this screen lists prioritized warnings for the operator.

Innes praised Dugway for its support of the GBSAA test since 2012. “Jenny (Gillum, the RIAC director) creates a team that can’t be beat,” he said, admiring their ability to anticipate requirements. “They probably have something that you need before you think of it. I’ve been to other places, but RIAC beats them all,” Innes said. Michael Army Airfield personnel, and the radio operators at Range Control, were also lauded by Innes for their test support over the years.

Eventually, the widespread adoption of the GBSAA system will make the safe, uncomplicated transit of military UAS commonplace, so operators can maintain their flight skills. Such flights will become routine, thanks to years of testing and support by PM UAS, Dugway and RIAC.