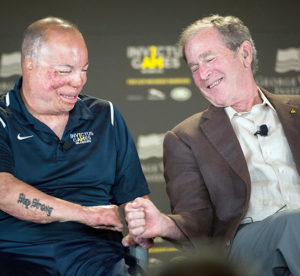 Former President George W. Bush fist bumps with Air Force Master Sgt. Israel Del Toro during the 2016 Invictus Games Symposium on Invisible Wounds in Orlando, Fla., May 8, 2016. The symposium, hosted by Bush and Britain’s Prince Harry, sought to destigmatize the victims of post-traumatic stress and other injuries that are not readily visible.

Great Britain’s Prince Harry, former President George W. Bush, and service members from each of their nations led a discussion at the 2016 Invictus Games Symposium on Invisible Wounds presented May 8 by the George W. Bush Institute in Orlando, Fla.

Former first lady Laura Bush said she and the Bush Institute leadership were grateful the symposium was addressing an issue that affects so many veterans, as well as their family members, many of whom become their caregivers.

“George and I are committed to caring for our veterans and their families through the Bush Institute,” she said. “We celebrate the service and sacrifice of our veterans at the 100-kilometer bike ride we host at our ranch and at the Warrior Open, a competitive golf tournament held in Dallas. We listen to the warriors tell their stories — their triumphs and their struggles. Through these testimonies, we’ve recognized that the invisible wounds are not treated in the same way as the visible wounds, and that’s why we’re here today, to educate more people about those invisible wounds.”

Getting help quickly
Harry said the 2014 Invictus Games in London smashed the stigma around physical injuries, and that he hopes this year’s Invictus Games can do the same for invisible injuries.

The prince, who served in Afghanistan as a combat helicopter pilot, recently acknowledged that he has post-traumatic stress to bring light to the importance of recognizing invisible injuries. He said the key to fixing the problem is speaking out and using the resources available.

“I’ve spoken to everybody who has severe PTSD, through to minor depression, anxiety, whatever it may be, and everybody says the same thing: if you can deal with it soon enough, if you deal with it quick enough and actually have the ability and platform to be able to speak about it openly, then you can fix these problems,” he said. “If you can’t fix them, you can at least find coping mechanisms. There’s no reason why people should be hiding in shame after they’ve served their country.” 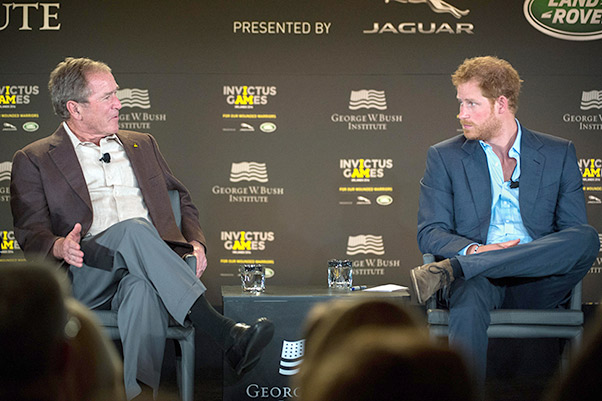 Special forces using support network
Air Force Master Sgt. Israel Del Toro, known as “DT,” was severely burned over 80 percent of his body during an improvised explosion device explosion in Afghanistan, and he said many people would just focus on his physical injury when he needed to admit he needed help with his invisible injuries as well. He said he comes from a career field, Air Force tactical air control party, in which service members don’t want people to know they’re hurt mentally.

“We want to show we can still do the fight and can still go out there and do what we want to do so we hide it,” he said, “but luckily I had some good family support and friends and teammates who were there.”

Royal Marines Lance Cpl. John-James Chalmers, a commando who goes by the nickname “JJ,” was caught in the center of a blast in Afghanistan, and half of his team was killed or injured.

“I was taken out by a helicopter and woke up in a hospital bed and received the care I needed, and these guys went on with their job that day. Things only got worse in many respects,” he said. “I consider myself extremely lucky I came back from Afghanistan broken physically, but mentally, I was still the same person who went to Afghanistan and came back, and this was probably because I had a great support network from my family, my wife now and a few people along the way that if I hadn’t had some casual conversations, there’s a good chance I wouldn’t be sitting here doing this now.”

Not all will admit they need help
Harry said not all commandos will admit they need help. “Commandos and paras are very strong minded, and they’re probably the last people to come forward if they had a mental health issue,” he said. “The first step is admitting you need to seek help. Just being able to talk about it early on is a huge, huge deal.”

Chalmers said service members are trained to block away their emotions and get on with the job, but that at the end of the day, “we’re just human beings.”

“I consider myself extremely lucky I came back in one piece,” he added, “but this has been a struggle, and I’ve had my friends beside me throughout this process.” 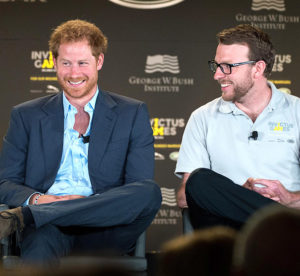 Better awareness
Both the prince and the former president said people with invisible wounds need better education of resources available for them and better access to care. They also said symposiums offer a chance for leadership and athletes from different countries to share knowledge.

Del Toro said the Invictus Games also gives the athletes a chance to showcase how they can overcome their invisible wounds and hopefully inspire others who may still be battling their injuries. “I want the opportunity to give everybody a voice and be able to change the narrative because our stories albeit some elements have tragedy within them but they are stories of triumph at the end of the day,” he said.

Bush said he’s pleased 13 other nations are participating in the games, because invisible injuries relates to everyone. “This is an issue that relates to every vet, not just American vets,” he said.

Harry said he encourages business leaders to hire service members who leave the service. “If I ran a business, I would want individuals like them, for the training they’ve had and for the values they stand up for,” he said.

Personal story
Medically retired Army Staff Sgt. Randi Gavell, who will compete in track and field, and swimming, shared her personal story at the symposium.

“Events like this really bring awareness to things that other people may overlook or just don’t understand so being able to, although shaking like a leaf, being able to go up there and speak about who I am and show people that this is who I am now, who I was and where I’m coming from and who I still am is great,” she said. “It’s still a big part of my life. It’s an opportunity for me to speak for other people and to hopefully give them a piece of hope at the same time.”

Gavell said the panel was phenomenal.

“It was fun to hear them, with DT and JJ kind of (going) back and forth, and see their humor come out a little bit and embrace the seriousness of the issue, but also know that we military members still find the humor in our everyday lives. It was pretty fantastic,” she said.

Del Toro said he enjoyed it as well, and that Bush always “busts my chops.” He was honored to be on the panel, he added, and to spread the word about invisible injuries.

“We really need to fix this,” he said. “If you keep saying everything’s great, it’s never going to change. As long as you stay vocal, that’s when things start changing. If you have the opportunity to talk to somebody, especially somebody who can make a difference, be vocal.”

Veterans can make huge contributions
Bush said many U.S. citizens say they have a miserable life, but do not have nearly the comeback stories as disabled veterans like the ones competing at the Invictus Games.

“Our vets want help, but they don’t want pity,” the former president said. “Our vets can make huge contributions. Our vets set such an incredibly good example for people.”

Harry said veterans deserve more than just thanks you for their service.

“You lead by example, which is incredibly important in today’s world, and it’s an amazing foundation to start with but now we’ve gotten to where it needs to be more than that,” he said. “We need to open our doors to these amazing individuals because we value these people. They’re the ones who’ve put their lives on the line. Their families have sacrificed everything. They deserve so much more than a shake of the hand and a thank you.”