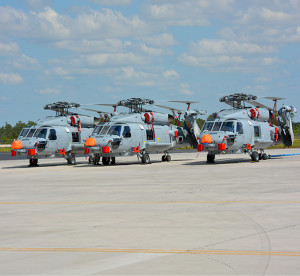 This is the first delivery to the Danish Defense, which is replacing their former fleet of British Lynx helicopters with the Seahawk.

The second foreign military sales procurement for the MH-60R, Denmark signed a Letter of Offer and Acceptance for the nine aircraft in December 2012. The first FMS MH-60R Seahawks in Europe, their primary missions will be maritime surveillance, anti-surface warfare, force protection and utility transport operations, e.g. supporting NATO in anti-piracy operations. In the Arctic and North Atlantic region, the Danish MH-60R will also provide support to austere regions, patrolling territorial boundaries, fisheries and perform search and rescue.

The MH-60R Seahawk is already operational and deploying as the primary U.S. Navy anti-submarine and anti-surface warfare system for open-ocean and littoral zones. U.S. naval forces have found the Romeo platform to be an operationally effective and reliable first responder for all missions and contingencies encountered at sea around the world. The Royal Australian Navy was the first to procure the MH-60R through the FMS program; their 725 Squadron achieved initial operating capability in September 2015.