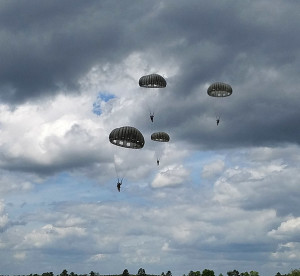 Members of the Georgia National Guard during a Pathfinder aerial operation benefiting from the data provided by the Man-Portable Doppler LiDAR system.

Researchers at the U.S. Army Research Laboratory have developed a new system that will enhance the capabilities of U.S. Army Pathfinders as they conduct aerial operations.

In response to a Request for Information from the U.S. Army-Africa to remove what is known as the pilot balloon from the battlefield, ARL undertook a program to reduce the size, weight and power of current commercial-off-the-shelf Doppler Light Detection and Ranging, or LiDAR, systems.

The pilot balloon is a small, helium-filled balloon that is released and tracked to measure a wind profile in support of personnel and precision airdrop operations.

Partnering with two companies, Beyond Photonics and Halo Photonics, ARL has developed a Man-Portable Doppler, or MPDL, LiDAR system that meets the requirements.

The total system weighs less than 45 pounds, is under two cubic feet and operates on standard 24-volt batteries with required power of less than 100 watts.

This reduction in overall SWaP has not impacted the system’s operational capabilities as compared to its predecessor, highly accurate Doppler LiDAR systems. 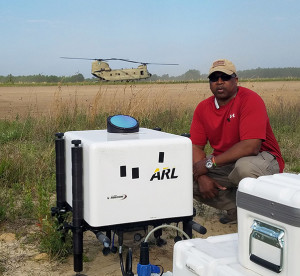 The modern U.S. Army Pathfinders are an elite force making up less than one percent of the total Army. Their primary mission is to infiltrate areas and set up parachute drop zones and helicopter landing zones for airborne and air-assault missions.

In addition to this training, Soldiers from the Georgia National Guard will be trained by ARL on the use of the Doppler LiDAR system prior to their deployment to the Central Accord 2016 joint exercises in Gabon, Africa this summer.

James is slated to accompany the Soldiers on the mission.

“Objectives for the Africa mission include demonstration of the MPDL capabilities and ways to improve LiDAR technology to address requirements impacting Pathfinder operations,” James said. “It is beneficial for ARL to have a representative on this mission, as I will be able to facilitate software/user interface for LiDAR parameters, answer any questions that may arise and further explore opportunities to employ LiDAR technology to enhance airborne and Army operations in total.” 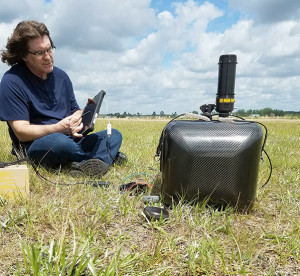 ARL’s Dr. David Ligon providing instructions on the operation of the Man-Portable Doppler LiDAR system during training with members of the Georgia National Guard.

If the rugged and versatile MPDL performs as expected, it will likely be selected by USARAF to remove the oftentimes unreliable and inaccurate, helium-dependent pilot balloon from the battlefield, providing our soldiers with a much needed modern capability that increases the accuracy of aerial delivery operations.

According to Pamela Clark, chief of ARL’s Battlefield Environment Division, the vision that James and Ligon had for this system truly came to life, revolutionizing military operations for war fighters on the battlefield.

“The Man-Portable Doppler LiDAR system significantly enhances our ability to achieve overmatch by more confidently understanding atmospheric impacts on airdrop operations,” Clark said. “David’s and DJ’s vision and hard work to further develop and transition this technology has resulted in a deployable system capable of revolutionizing how we measure winds aloft for military operations.”