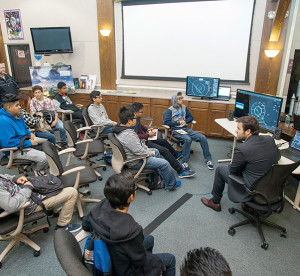 Born after 1995 during the onset of the Internet, Generation Z grew up playing video games. Recently students from this generation participated in a simulation that could lead to the reality of unmanned aircraft flying in the National Airspace System, NAS, along with piloted aircraft.

NASA’s Armstrong’s Office of Education and the AERO Institute in Palmdale hosted 22 Lancaster High School ninth-grade students to participate in a workshop as part of the Lancaster Academy of Multimedia Programming and Engineering, LAMPE, April 25.

Similar to playing a video game, students performed the role of the pilot for the remotely piloted aircraft, named Ikhana. Piloted airplanes in the national airspace intrude upon the unmanned aircraft. In the simulation, they used displays for Detect and Avoid, DAA, and Traffic Advisory and Collision Avoidance Systems, TCAS II, as part of a project to integrate Unmanned Aircraft System in the airspace.

“In addition to the hands-on UAS-NAS simulator activity, the students participated in an exercise where they learned the importance of teamwork and communication to complete a search-and-rescue mission for a lost child using Ikhana,” said Maria Caballero, NASA aerospace engineer. 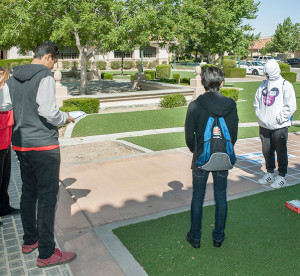 The search and rescue hunt for the child was contained in an 8-foot-by-8-foot grid where obstacles such as trees and mountains were in the way of them locating the lost child using an unmanned aircraft. The simulation required students to act as pilot, air traffic controller and flight planner.

The students ended the day with an engineering challenge to design a wind-powered system. Students determined the most efficient propulsion-driven aircraft design, such as the number of propeller blades and wind effects.

LAMPE provides pathways for students to use applied project-based learning activities and leading-edge technology to engage them in science, technology, engineering and mathematics, or STEM, related activities.