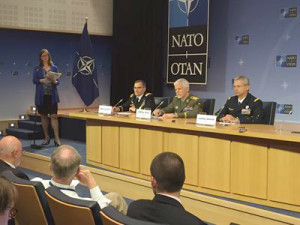 NATO’s chiefs of defense agreed that a flexible conditions-based plan is best for the alliance’s Resolute Support Mission in Afghanistan, Gen. Petr Pavel of the Czech army, the chairman of the alliance’s Military Committee, said in Brussels March 18.

It was a full agenda for the 28 chiefs of defense, including Marine Corps Gen. Joe Dunford, the chairman of the Joint Chiefs of Staff. The military chiefs reviewed the progress being made in implementing the alliance’s readiness action plan, and they discussed ways to move forward with NATO’s long-term adaptation, Pavel said.

“What was clear from our strategy session this morning is that it is paramount that NATO continues to have a full range of capabilities at its disposal in order to counter any threat from any direction in a 360 approach,” Pavel said.

Balancing the requirements is fundamental, the general said — “balance in terms of how we assure our defense capabilities, not exclusively through enhanced forward presence, but mainly through ready and responsive follow-on forces.”

The chiefs also dealt with the threats from the alliance’s southern flank. Pavel said the chiefs of defense considered concrete military actions that NATO could undertake to project stability, in concert with existing bilateral and multilateral arrangements.

Afghanistan remains in the forefront and the NATO chiefs, along with the chiefs from 13 partner nations, “reaffirmed their enduring commitment to Afghanistan and to the mission which provides critical training, advice and assistance to the Afghan security forces and institutions,” Pavel said. “The [chiefs of defense] also re-emphasized the need to have a flexible, conditions based approach to the future parameters of the mission.”

The chiefs received a briefing from Army Gen. John W. Nicholson, the commander of the NATO Resolute Support Mission. Pavel said the European allies are apt to keep their support to the mission at the current troop level.

Segueing off the Afghanistan discussion, the chiefs talked about building defense capabilities and maintaining stability in partner nations.

“Deploying allied forces is not always the answer to the problem,” Pavel said. “Local and regional actors have an equally important role to play in global security, therefore, NATO is working with its partners to give them the appropriate assistance and advice they require to secure and stabilize their territories and project stability from within.”

Russia is always an issue in NATO now. “During the session with Ukraine, the allied chiefs of defense reaffirmed their condemnation of Russia’s illegal annexation of Crimea and its continued active participation and support to the separatists in Eastern Ukraine,” Pavel said. “They welcomed the update on the progress of the Ukrainian armed forces development, especially taking into consideration the security reality in Eastern Ukraine and along the country’s eastern border.”

This was Scaparrotti’s first meeting as supreme allied commander, and he stressed the progress that has been made over the years.

“Our alliance has remained united through the decades, committed to our solemn pledge to defend each other,” the general said. “The Wales summit [in 2014] laid the foundation on the readiness action plan to strengthen NATO and to ensure the alliance is robust and ready to deal with any challenge. I am amazed at what the alliance and each nation has accomplished in the support of this effort.”

Since Wales, there has been significant readiness and responsiveness progress in forces because of the nature of the challenges the alliance has faced, he said. “But I would say there is more that needs to be done,” he added.

Scaparrotti made particular mention of the enhanced NATO Response Force, the Very High Readiness Joint Task Force and the establishment of Multinational Corps North East, Multinational Division Southeast and the Division Force Integration Units. All are operational and are part of the NATO exercise program to ensure the force remains trained and ready, he said, “ensuring we have everything we need to protect our civilians and the territory.”

The world is changing, and so must NATO, Scaparrotti said. “But what remains unchanged is our unity and solemn commitment to each ally to defend each one.”
=