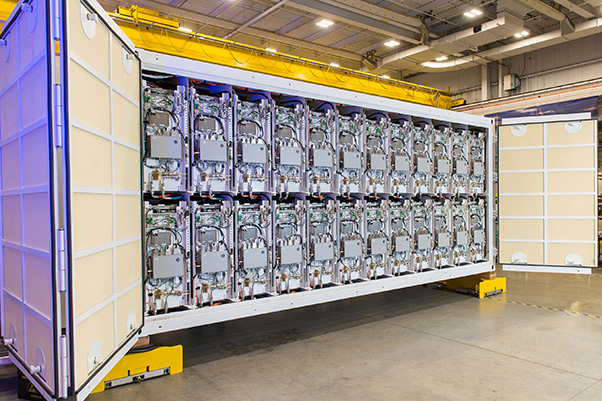 Raytheon built this pulse power container to provide the mighty 32-megajoule jolt that the U.S. Navy’s new railgun requires. The railgun would fire a projectile at six times the speed of sound.

Raytheon has begun deliveries of pulse power containers in support of the U.S. Navy’s Railgun program.

The containers, which are comprised of multiple pulsed power modules, will be integrated into the Navy’s Railgun test range for additional development and testing.

The modular pulsed power containers, when combined, produce enough energy to enable the electromagnetic launch of a railgun’s high-velocity projectile at speeds in excess of Mach 6.

“Directed energy has the potential to redefine military technology beyond missiles and our pulse power modules and containers will provide the tremendous amount of energy required to power applications like the Navy Railgun,” said Colin Whelan, vice president of Advanced Technology for Raytheon’s Integrated Defense Systems business. “Raytheon’s engineering and manufacturing expertise uniquely position us to support next generation weapon systems to meet the ever-evolving threat.”

Raytheon’s pulse power container design is the result of work stemming from an initial $10 million contract with Naval Sea Systems Command to develop a pulsed power system, which will enable land or sea-based projectiles to reach great distances without the use of an explosive charge or rocket motor.  Raytheon is one of three contractors developing a PPC design for the U.S. Navy.