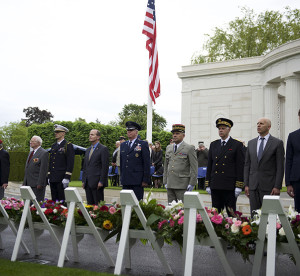 Honor, dedication, selfless service, personal courage, friendship – today’s military men and women embody these values, instilled onto them by the tradition and sacrifice by those who came before.

“On this upcoming Memorial Day weekend, we remember and pay homage to all of our citizens, men and women, military and civilian, who have made the ultimate sacrifice in the service of their countries,” said Huston. “Their courage and sense of duty inspires us and sets the standard that we all should hope to live up to.”

On Sept. 12, 1918, the battle for the Saint-Mihiel salient began, led by the newly established U.S. First Army and by September 18, Allied forces successfully pushed back German forces and took back critical terrain on the front lines. During this period, approximately 660,000 American and French troops, along with roughly 1,500 Allied aircraft moved against German forces which had positioned themselves within France. This would be the first time in history that American forces would rely heavily on the massive use of air power.

An anticipated 50,000 soldiers were expected to be lost during the campaign, but thanks to the seamless cooperation and dedicated service by American and French forces, causalities were limited to 7,000 soldiers. Today, 4,153 of these heroes are buried at the Saint-Mihiel American Cemetery. 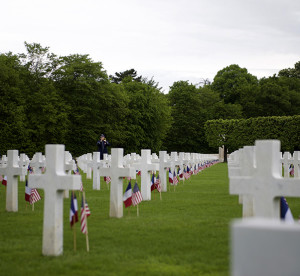 TSgt. Jeffrey Reich with the U.S. Air Forces in Europe Band, plays taps preceding the raising of the colors. American and French citizens paid respects to World War I heroes during a remembrance ceremony at the Saint-Mihiel American Cemetery, May 22, 2016.

“As we look across this quiet and peaceful cemetery, we bear witness to the incredible sacrifice, heroism and volunteerism of American servicemen and women who left their homes and families, to travel across a broad ocean to a faraway land to fight side by side with our allies,” said Huston. “In General Pershing’s own words ‘Time will not dim the glory of their deeds.’”

The ceremony also included speeches by the Thiaucourt Mayor, the Nancy Prefect, a performance of “The Air Service over the Salient” by the Ferdinand Buisson college-Thiaucourt, taps by the United States Air Forces in Europe Band, and a U.S. Air Force honor platoon formation.

During Memorial Day we remember and honor the sacrifice of the men and women who fought for freedom. We remember the soldiers and free citizens who fought to protect their families, their homes and their ways of life from those who wished to seize it from them.