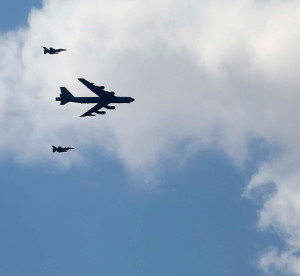 A B-52 Stratofortress receives an escort from two Royal Jordanian Air Force F-16 fighter aircraft at the start of a combined arms live-fire exercise near Al Zarqa, Jordan, during the culminating event of exercise Eager Lion on May 24, 2016. Eager Lion is a bilateral military exercise with Jordan and U.S. forces designed to strengthen relationships and enhance interoperability between both nations.

Two B-52 Stratofortress bombers assigned to the 2nd Bomb Wing at Barksdale Air Force Base, La., returned May 24 from a 35-hour, 14,000-mile nonstop mission to Jordan as part of this year’s exercise Eager Lion with Jordanian Armed Forces.

Eager Lion is an annual U.S. Central Command exercise hosted by the Jordan government to test responses to conventional and unconventional threats in a joint environment. Exercise mission sets are based on a fictional adversary and range from border security, command and control, and cyber defense to battlespace management. Eager Lion 16 marked the second consecutive year of the integration of the multi-role, heavy bomber into the exercise.

“Executing these global bomber training missions supports successful integration into geographic combatant command and multinational operations, such as the current B-52 deployment in support of Operation Inherent Resolve,” said Navy Adm. Cecil D. Haney, the U.S. Strategic Command commander. “Our participation in two Eager Lion exercises in as many years allows us to continue to build relationships with our allies and partners in the region and beyond, better enabling us to confront today’s global challenges.” 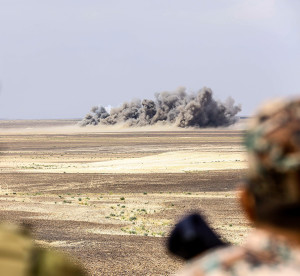 A B-52 Stratofortress drops Mark 82 bombs during a combined arms live-fire demonstration as part of exercise Eager Lion at a training area in Jordan on May 24, 2016.

Combined with the long-range nature of the flight, which involved four aerial refueling operations, this mission showcases the flexible capabilities of the bomber force and its ability to integrate with other nations around the world.

STRATCOM’s bomber force regularly conducts combined training and theater security cooperation engagements with allies and partners, demonstrating the U.S. capability to command, control and conduct global bomber missions anywhere. B-52 participation in exercise Eager Lion follows the deployment of B-52s to Morón Air Base, Spain, in February and March, where they participated in Norwegian exercise Cold Response and French exercise Serpentex, as well as the deployment of B-2 Spirits to the Indo-Asia-Pacific in March. Additionally, in April, a B-52 flew a sortie to France to integrate with the French air force, and a B-52 also flew to South America to train with the Colombian air force.