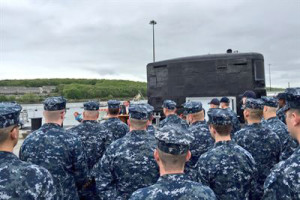 Defense Secretary Ash Carter addresses service members at Naval Submarine Base New London in Groton, Conn., May 24, 2016. Carter commended them for their work and asked them to help in attracting and retaining their successors.

Protecting the nation and much of the world is a U.S. duty because of the challenges and opportunities that exist, Defense Secretary Ash Carter told service members at Naval Submarine Base New London in Groton, Connecticut, May 24.

The secretary toured an operational Virginia-class submarine and said he is confident in U.S. undersea superiority as a great military strength, telling the service members their work reaches far, including the campaign to defeat the Islamic State of Iraq and the Levant.

“I’m also confident that we’ll retain it in the future, but it’s not a birth right. We have to work at it,” he said of military superiority. “We have to spend money on it, which we’re doing and will do. We have to be innovative in technology. And we have to have really good people.”

The United States must retain its lead over the capabilities of countries such as Russia and China, he said, adding that the nation also must keep vigilant watch over Iran and North Korea.

“It’s an uncertain world, and we have an almost-perfect record of not anticipating what comes next,” Carter said. “You’re an insurance policy against that uncertain future, because you’ll be ready and you’ll be an awesome capability [against] whatever comes down the road.”

The secretary emphasized two points in his troop talk. The first is that continuing to be the best requires the United States to have a competitive mentality and always think, innovate, absorb the newest technology, look outside the walls and be willing to take ideas.

Secondly, he said, “We are and have the finest fighting force the world has even known, principally because of the quality of our people. And attracting good people to follow you, retaining good people like you in the future, is an important responsibility [that] I and the rest of the leadership have.”

The secretary asked the service members to think about what would bring people with their abilities into the military and what would retain for 10, 20 or 30 years.

“We’ve got to work at that kind of thing,” he said. “That’s why it was important to me, and you have done an excellent job with it here, to … welcome women who are qualified into the service.”

Carter said he’s aware that sacrifices are vital to service, and such matters should be minimized when possible.

“I don’t take it for granted that you’re here,” the secretary said. ‘I very much appreciate it. You’re talented people.” Though they have alternatives to serving in the military, he told the service members, they stick with it because they love it — the mission, their shipmates and their country.