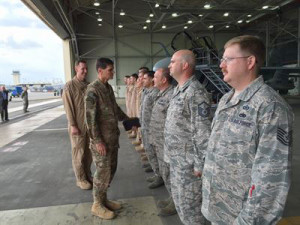 The U.S. Central Command commander’s visit to Incirlik May 23 was the final stop in a trip this week that took him to five countries in Centcom’s area of responsibility.

Speaking to reporters traveling with Votel, McCarthy said he commands 550 military personnel involved with his 12 A-10 Thunderbolt II attack aircraft and 12 KC-135 Stratotankers — 350 to 375 of them associated with A-10 maintenance or operations.

“We handle roughly 33 percent of the air refueling for Operation Inherent Resolve, and on the close-air support side, the A-10 side, we handle about around one-fifth of coalition close-air support,” McCarthy said, “and when you’re talking U.S.-only it’s just under 30 percent.”

The colonel said right now most A-10 missions are over Syria and include air support for the Syrian Democratic Forces in the northeastern part of the country.

Operations tempo
The tempo of operations over Syria is 24/7, McCarthy said.

The A-10s, commonly known as “Warthogs,” arrived Oct. 18, 2015, just after the Turkish government opened Incirlik up to strike assets, McCarthy said. The A-10 crews at that time were from Moody Air Force Base in Valdosta, Ga., and they redeployed in late April. Now crews from the Boise, Idaho, Air National Guard fly and maintain the A-10s.

“We have lots of spare aircraft [and] we’re priority one with spare parts, so we generally have all the capability to fix our aircraft on hand. In fact,” McCarthy said, referring to an A-10 in the hangar behind him, “this is a jet that’s just about ready to go into phase inspection in the next hangar.”

The colonel said a phase inspection is done on an A-10 every 5 days or so, but “with Moody, in six months they did 2.5 years’ worth of phase inspections … These guys, when you have nothing to do but focus on your job, you’re just cranking out the missions.”

Deliberate versus dynamic targeting
Coalition partners are at Incirlik too, the colonel said, “but I would say we have just as much of an international presence here at Incirlik as we do U.S. [forces].”

The A-10 missions are usually autonomous, McCarthy said.

“Integration isn’t required at the dynamic level — so a troops-in-contact [report] pops up or a target pops up at short notice, and we respond. It generally doesn’t involve an integrated effort with the coalition. It’s just usually a two-ship of A-10s that show up overhead and we conduct our mission,” he added.

“Where we do integrate as a coalition is on deliberate targeting, deliberate strikes,” McCarthy explained.

To coordinate a deliberate strike, the Combined Air Operations Center works with a regional Combined Joint Task Force target engagement authority to vet a target, determining which weapons are needed to strike the target, which assets have the right capabilities, and which assets are available, he added.

“Deliberate targeting is only about 10 percent of our missions versus dynamic. You never know when the dynamic need is going to arise, that’s why you need aircraft airborne pretty much all the time in the strategic locations,” McCarthy said. 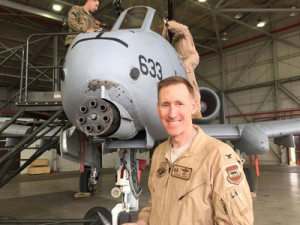 Air Force Col. Sean McCarthy, 447th Air Expeditionary Group Commander stands in front of one of the 12 A-10 Thunderbolt II attack aircraft under his command at Incirlik Air Base in southeastern Turkey, May 23, 2016.

“The No. 1 thing when it comes to strikes is making sure we do as little damage as possible, especially killing civilians. We try very hard to keep that from happening,” he said.

For McCarthy, the decision to employ the A-10 itself speaks to the collateral damage and civilian casualty issues.

“Gone are the days when they had to download bombs, upload torpedoes, and where they could only carry one thing. On the A-10 we carry just about everything that we’re slated to do [on a mission] on one aircraft,” he said.

A fully loaded A-10 can carry 2,000-pound and 500-pound joint direct attack munitions, or JDAMs, bombs; laser-guided JDAMs; the AGM-65 Maverick air-to-ground tactical missile; and, McCarthy said, “don’t ever forget the [30-millimeter GAU-8/A Avenger] gun with 1,150 rounds — what that aircraft was built around.”

Target, weapon selection
The colonel said the gun — a hydraulically driven seven-barrel Gatling-type auto-cannon — is the only thing on the A-10 that’s not guided by a Global Positioning System signal or a laser beam.

“But you don’t need it to, because it’s so deadly accurate,” he added.

Pilots tend to use the gun when collateral damage is a concern, he said.

Pilots might use a 2,000-pound bomb if they wanted to go after a large building, for example, but to avoid collateral damage they might instead use a smaller bomb or delay the fuzing, allowing the bomb to penetrate the target a little before exploding to contain the blast, the colonel said.

If the mission involves a checkpoint being run by the Islamic State of Iraq and the Levant and the A-10s “want to go after the guys running the checkpoint, but we don’t want to target the vehicles they’re inspecting because there’s no way to know whether they’re civilian noncombatants or not, we don’t take the chance [of using a bomb],” McCarthy said.

“That’s a type of target we’ll go after with the gun,” he added. “It’s a low-collateral-damage weapon, pinpoint accurate, and we employ high-explosive incendiary rounds so nothing’s walking away from that if they get hit.”

Using their expertise
The mission at Incirlik, McCarthy added, is like an Olympics for A-10 pilots.

“This is where we get to use our craft,” he said.

McCarthy added, “All those months and years of hard training are paying off, and that’s why you’re not seeing anyone getting shot down, it’s why we’re not getting surface-to-air fire hits and why our maintainers are able to generate 100 percent of the air tasking order missions.”