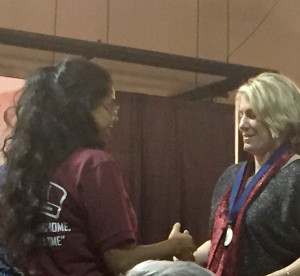 Blackhawk pilot Jen Housholder (right) is honored with medal at Pride Of The Nation.

LANCASTER, Calif.– Army Chief Warrant Officer Jen Housholder is a Blackhawk helicopter pilot with two tours in Iraq from a unit that flew air assaults and casualty evacuations, and by her own description she is a “Type A get it done” kind of personality.

She was also an Air Force major and wears the jump wings of a military parachutist, and her call sign was “Dark Helmet,” a humorous reference to the spoof of Darth Vader in the send up of “Star Wars” from Mel Brooks, “Spaceballs.”

That’s because she is so “vertically challenged,” just topping a little over five feet, that when her pilot’s helmet was donned she kind of looked like the undersize Darth Vader with an oversize helmet.

But her combat tour more than 10 years ago wasn’t funny. It was heartbreaking.

At the “Pride Of The Nation” dinner gala put on by Lancaster High School history students, Housholder shared some of how situations that are “downright ugly” can be used to show that with the right attitude you need not be broken by heartbreak.

“It’s called resiliency,” she told an audience of several hundred veterans of military service, and their friends and family.

Housholder’s parents — and her Labrador service dog — were in the audience. They were there joined by hundreds of veterans and their families, friends and relatives who gathered over Memorial Day weekend for the annual Pride of the Nation gala put on by the high school students to express gratitude for those who have served.

Among the everyday heroes recognized at the gala at the Antelope Valley Fairgrounds were men and women whose service began during World War II. Among them, Marine Sgt. Patricia Murray, who is 98, and Navy veteran George Fischer, another nonagenarian, were singled out for recognition.

Others honored served in far-flung outposts from Korea, to Vietnam, to the global fronts of the Cold War, and the battlefields of the Middle East. Honored at the dinner were veterans who served in Iraq, Afghanistan and other fronts of a war against terrorists, including ISIS and other Islamic extremists.

Housholder was the headliner of the evening in two ways.  Housholder is an Army and Air Force “master resilience” trainer, and she provided insights on recovery from trauma to an audience of many veterans of many wars who had sustained their own traumas.

She also performed songs live for the audience that she composed, accompanied by a guitarist from her off-duty musical ensemble, the Hous Band.

Housholder’s message about recovery from trauma was three-fold. And it is a universal kind of theme that would be helpful to active military, veterans and civilians alike, anyone dealing with the challenges of how a traumatic experience “re-wires our nervous system.”

“We don’t know how long the storm will be,” she said. “My storm went on for years.”

In Iraq she, and others in her unit, were subjected to severe harassment. It was, she said, harassment that was severe enough, ugly enough, and treacherous enough that “it sent her into a dark place,” and a downward spiral that ushered in contemplation of suicide.

“I’ve been in the military for 18 years, and I want to stay for as long as they will have me,” she said.

“Most of my experiences were amazing, that ‘Band of Brothers,’ and ‘Band of Sisters,’ but this experience was not,” she said. “It was downright ugly.”

When comrades in arms abandoned their military core values and failed to protect their “battle buddies” in her unit in Iraq, the byproduct was personal betrayal and thoughts of suicide.

“I thought, ‘I’m going to actually to this,’ to end the pain, to end the anguish.”

Instead of ending her life, Housholder said she had to rally, find her strengths and resiliency and do a “reset” on her life.

“You have to face the storm,” she said, adding that attempting to “numb out,” or run away and seek distraction will not work.

It is often spiritual strength that carries someone through the storms of life, she said. Somebody who is physically tough, can be broken. But people who endure and recover, like World War II POW Louis Zamperini of “Unbroken,” and Gulf War POW Maj. Rhonda Cornum are people who reach down and find their spiritual resources, she said.

Resiliency means being flexible in adversity, and she said that can be difficult “for many in the military who are ‘Type A’ personalities,'” people who believe they know how to do a thing, and pursue that course rigidly.

“Are you open-minded?” she asked.

Finally, she said, it was her own decision to “open herself up” to new ideas and options that led her to learning about brain science, and then learning how to re-regulate a nervous system that was disrupted by earlier life traumas compounded by the harassment she experienced during service as a combat aviator.

But trauma can be overcome with attention to positive mental outcomes.

“Are you an optimist?” she said, saying optimism is a remedy for mental anguish.

She cited research emerging in the field of post-traumatic growth, a topic area of mental health development that the Army calls “getting the good stuff,” and the Air Force calls “counting blessings.”

“It’s in the Bible, and it’s in most of the world’s religions,” she said. “One of my core values is my faith in God.”

An accomplished singer-songwriter with her own performing group, the Hous Band, she urged anyone with questions about trauma and recovery to contact her at her website, www.hous-band.com, or on FaceBook.

For this Memorial Day weekend the theme of this year’s gala was “Remember The Fallen; Thank the Living,” and the competitive theme was the unanimous choice of the students, their teacher and adviser, Jamie Goodreau said.

The theme was submitted by two Gold Star parents, Kellie and Richard Allen, who lost their son, Sgt. John E. Allen, a combat medic, on March 17, 2007.

Educator Goodreau, a Los Angeles County Teacher of the Year honoree, was commended by state Assemblymen Tom Lackey and Scott Wilk, and state Sen. Sharon Runner for her work with the Pride and OATH students in support of veterans and their familes.

Rep. Steve Knight, an Army veteran of the Cold War, said, “For as long as I can remember, she’s changed young people’s lives, made them understand what America’s about, made them thank our veterans for what they do on a daily basis. This isn’t just one event. You can never ever stop being amazed at what she does.”

Among the supporter for the event’s program was Aerotech News & Review, a “Pride Of The Nation” Gold level sponsor.

The evening’s finale, a tradition of all previous years, has been a gathering of veterans from all armed services, Army, Navy, Marines, Air Force, and Coast Guard, to be awarded commemorative medals.

Disabled veterans such as Richard Ketchum of the Air Force were lifted to the stage by wheelchair lift and escorted back to the floor to join alongside their brother and sister veterans.