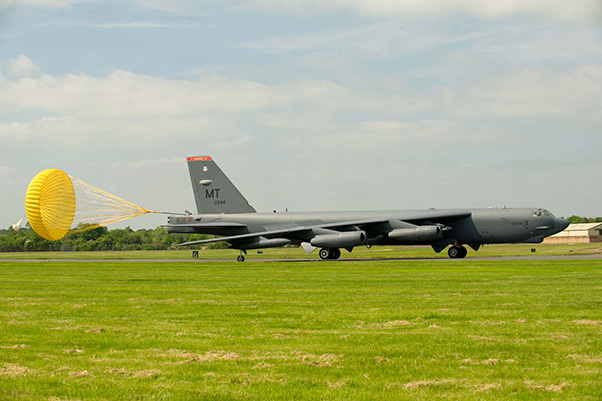 A B-52H Stratofortress from Minot Air Force Base, N.D., taxies down the runway at Royal Air Force Fairford, England, in support of exercises Saber Strike 16 and Baltops 16 on June 2, 2016. The B-52 is capable of carrying up to approximately 70,000 pounds of munitions; which include gravity bombs, cluster bombs, precision guided missiles and joint direct attack munitions.

With the sharp screech of rubber meeting asphalt, two B-52 Stratofortress bombers from Minot Air Force Base, N.D., touched down June 2 at Royal Air Force Fairford in England.

For the third year in a row the bombers have deployed to RAF Fairford to participate in bilateral training exercises. This year marks an integration with allied military forces through U.S. European Command’s exercises Baltops 16 and Saber Strike 16, as well as U.S. Africa Command’s exercise Just Hammer.

Using RAF Fairford, which normally operates as a lean base within the scope of the 501st Combat Support Wing, as a strategic hub for these exercises, the bomber crews have a unique opportunity to integrate and train with U.S. service members, allies and partners in a multitude of operations.

“The ability to integrate strategic bomber forces in a variety of missions is key to ensuring the U.S. is able to honor our security commitments,” Denehan said. “This deployment to RAF Fairford is about participating in long-standing exercises and conducting necessary training within the region.”

RAF Fairford’s unique strategic location, capabilities, facilities and ability to transform from a lean base to an active, operational installation, makes it a key location for large-scale exercises and readiness operations. 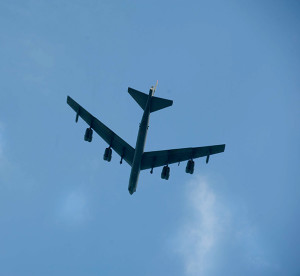 A B-52H Stratofortress from Minot Air Force Base, N.D., arrives June 2, 2016, at Royal Air Force Fairford, England. The deployment of U.S. bombers to RAF Fairford was in support of exercises Saber Strike 16 and Baltops 16, which was coordinated with U.S. European Command and NATO, and demonstrated America’s long-standing relationship with its U.K. allies.

“With the second longest flightline in the United Kingdom, we have an airfield that can accommodate a B-52 with no stress on the pavement,” said Frank Dailey, the 420th Air Base Squadron site director at RAF Fairford. “Out of our 55 wide-body parking spots, 43 have the ability for on-the-spot hydrant refueling, which allows for quicker sortie turnarounds.”

Throughout the exercises, RAF Fairford will host the bombers, along with about 250 Airmen from Air Force Global Strike Command, and U.S. Air Forces in Europe and Air Forces Africa.

The training is designed to build and strengthen partnerships across the continent, as well as ensure interoperability with NATO allies and partners to remain strong and focused on a shared commitment to peace and global security.

U.S. Strategic Command routinely deploys bombers to both the EUCOM and U.S. Pacific Command areas of responsibility to train and integrate with allies and partners, while also demonstrating the ability to maintain command and control of the bomber force anywhere in the world. The most recent deployment of B-52s to Europe was in March in support of exercises Cold Response and Serpentex.