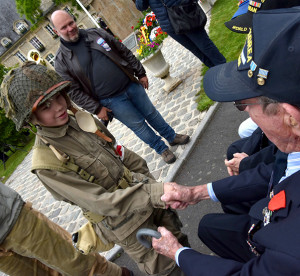 CARENTAN, France – A French boy thanks veterans for freeing his country at the annual Cabbage Patch ceremony and parade. Soldiers and civilians gathered for the ceremony and parade, commemorating the Battle of Carentan during the allied invasion of Normandy during World War II. More than 380 service members from Europe and affiliated D-Day historic units are participating in the 72nd anniversary as part of Joint Task Force D-Day 72. The Task Force, based in Sainte Mere Eglise, France, is supporting local events across Normandy, from May 30-June 6, 2016, to commemorate the selfless actions by all the allies on D-Day that continue to resonate 72 years later.

To history buffs, it’s known by many names, D-Day, the Invasion of Normandy or even Operation Overlord, the name Sir Winston Churchill, then prime minister of England, gave it in accordance with his intense interest in operation nomenclature.

Now, 72 years later, the world has changed, but the 50 mile stretch of coastline known as Normandy remains in solidarity in welcome to the troops, both the veterans and today’s generation of Soldiers, who in their estimation, did not invade, but “liberated” Normandy.

“Invasion is an act of war, a liberation is an act of helping people to get rid of some kind of tyranny,” Denis van den Brink, communications officer of the city of Carentan, France, said. “Actually both terms are correct. It was an invasion in a way that suddenly foreign armies swept through France. But it was a real liberation from the tyranny of fascism. ”

“The allied army, more specifically, the American Army, they came to liberate, not to conquer,” van den Brink said. “That’s what it says in the Coleville cemetery, where 10,000 Americans are resting forever. That says it all, for the very first time in the history of mankind, they came to fight, die, win, victory, and then go home. That’s the one and only example in the history of mankind and we had all these foreign soldiers coming and dying and to fight for our land and then to free our land and then instead of staying they just went away.”

Every year, Americans, French, British, German and people from around the world come to this coastline for a week or more of observances. Along the southern coastline, by the famed beaches of Omaha and Utah and towns such as Sainte Mere Eglise, the town liberated by paratroopers from the 82nd Airborne Division, and Carentan, the town liberated by the 101st Airborne Division, streets are lined with flags, American, French, Canadian, British, Norwegian and German. Across the countryside are monuments, museums, and events.

“It’s amazing being here, the French people are so friendly to us,” said Sgt. Ryan Golden, an Unmanned Aerial Vehicle maintainer from the 617th Cavalry Regiment, 4th Infantry Division. Golden was one of the soldiers from historic D-Day units here to participate in ceremonies. “When I got here the welcome was tenfold, it’s like we’ve lived here our whole lives and we have just come home, the people of Normandy treat us like they are our families.”

In addition to all the military ceremonies across the countryside, reenactors visit annually from around the world. They dress up as military personnel from the 1940s, often driving period jeeps and motorcycles. An entire culture of World War II military reenactors add to the feeling of the week with marches and street parties and parades.

“I’ve met and spent some time with the reenactors, they’ve been helping me learn French and I’m helping them learn English,” said Golden.

Most importantly, the thousands who gave their lives on the day and in the liberation itself are honored, and the survivors who, 72 years on, are few and farther between, are given a heroes welcome. Although the world considers them the very definition of hero, the veterans themselves are humble when they talk about that day.

More than 380 service members from Europe and affiliated D-Day historic units participated in the 72nd anniversary as part of Joint Task Force D-Day 72. The Task Force, based in Sainte Mere Eglise, France, is supporting local events across Normandy, from May 30 to June 6, 2016 to commemorate the selfless actions by all the allies on D-Day that continue to resonate 72 years later.