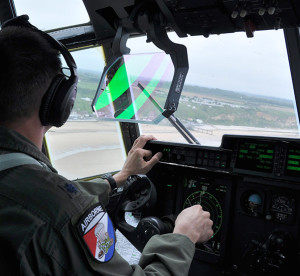 C-130J Super Hercules aircraft flew over many towns, villages and historical sites near Normandy, France, June 3 in honor of the 72nd anniversary of the D-Day invasion.

U.S. European Command established Task Force D-Day 72 to lead U.S. forces’ participation, represented by eight historical units including the 815th AS which fought in the campaign.

On June 6, 1944, more than 160,000 Allied troops landed on the French coastline to fight Nazi Germany on the beaches of Normandy. The then-815th Bombardment Squadron flew the B-17 Flying Fortress heavy bomber. More than 13,000 aircraft and 5,000 ships supported the invasion, according to the army.mil website. 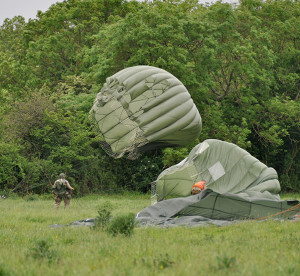 Members of the Round Canopy Parachuting Team, dressed in D-Day period uniforms, parachute into Fresville, France, during an exhibition jump June 2, 2016. The team invited members of the 815th Airlift Squadron to assist in the drop zone. More than 380 service members from Europe and affiliated D-Day historical units participated in the 72nd anniversary of the World War II invasion.

From the sky looking down, 1st Lt. Will Garey, an 815th AS pilot, said that he could see the flashes from the many cameras pointed upward as they flew over the town of Sainte-Mère-Église during the re-enactment ceremony on June 3. This was one of many ceremonial events in honor of the 9,000 Allied soldiers who were killed and wounded during the invasion that allowed more than 100,000 soldiers to make their way across Europe to defeat Adolf Hitler’s regime.

After completing the flyovers, 815th AS aircrew members went into Sainte-Mère-Église to visit with the local community and other visiting service members.

John and Esther Van Vlaardingen, Netherland residents and D-Day role play actors, said that the flyover was great and looked good. The D-Day re-enactors were given a tour of the 815th AS C-130J before the flyovers began Friday.

“It was great to see our friends from the ‘Flying Jennies’ again,” John said of the Reserve squadron. “We met (Maj. Mark Suckow, an 815th AS pilot) seven years ago and he gave me a coin, never thought we would meet him again and to also get a tour.”

The flyovers were one part of the commemoration. The 815th AS also provided transport for military airborne troops for an airdrop June 4. The airborne troops’ jump was in remembrance of the service members who served during World War II.