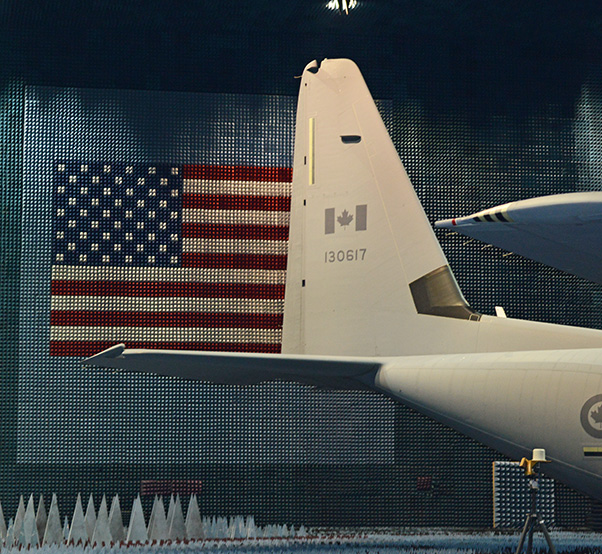 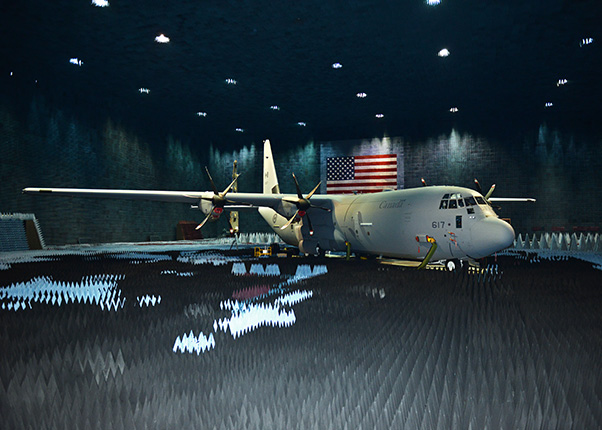 A Royal Canadian Air Force CC-130J tactical airlift aircraft sits in the Benefield Anechoic Facility undergoing electronic warfare testing. Canada purchased 17 CC-130Js with the last one delivered in 2012. The RCAF CC-130J fleet is currently going through a Block 7 upgrade to the aircraft avionics

For the first time ever, a Royal Canadian Air Force plane has entered the Benefield Anechoic Facility at Edwards Air Force Base, Calif.

A team of engineers, operators and defense scientists from Canada, are wrapping up electronic warfare testing of an RCAF CC-130J Hercules transport plane.

Canada is updating its fleet of legacy CC-130H aircraft with the J model, which are the same as the U.S. Air Force C-130Js and used for tactical airlift of troops and supplies.

The team has conducted multiple tests in the past couple of weeks focusing on the ALR-56M radar warning receiver and its integration with the rest of the Defensive Electronic Warfare Suite and aircraft mission computer.

“The BAF is the closest thing to actually flying the aircraft in an RF threat environment. The chamber allows us to execute multiple test objectives in a controlled-repeatable manner and collect data to evaluate the radar warning receiver’s technical performance and effectiveness.” said Emil Poliakov, Canada Department of National Defense, radar warfare engineer.

The BAF, operated by the 772nd Test Squadron, is the largest anechoic chamber in the world and can fit pretty much any airplane inside. It provides a “free space” so electronic warfare tests can be conducted without radio frequency interference from the outside world. The chamber is filled with polyurethane and polyethylene pyramids designed to stop reflections of electromagnetic waves. The size of the pyramids, which are painted dark blue or black, varies depending on the particular frequency and test procedure being conducted. Aircraft systems can be tested and verified that they work properly prior to actual flight test. 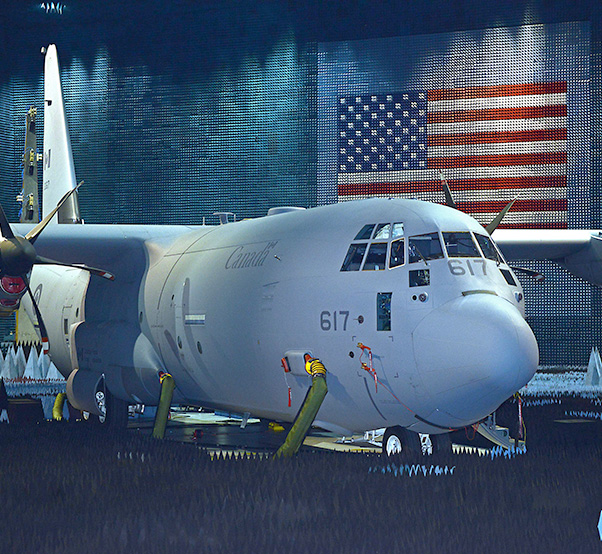 A Royal Canadian Air Force CC-130J transport plane sits in the Benefield Anechoic Facility May 24 undergoing electronic warfare testing. The CC-130J is from 8 Wing located at Canadian Forces Base Trenton, Ontario. The J model has six propellers and can fly faster, higher and farther than legacy versions, while carrying heavier loads with better fuel economy.

The isolation from outside interferences enables testers to determine the electromagnetic compatibility of the CC-130J’s systems.

“Our DEWS systems are often programmed and tested in isolation. We do not have a capability like the BAF, which would allow us to test the systems in an integrated fashion. This program allows us to exercise the compete integrated suite before the aircraft goes through an expensive flight trial,” Poliakov said.

The test team designed all the emitters the BAF is going to generate around a fictional threat area.

“We’ve setup our objectives to simulate a contested [radio frequency] environment and we’re going to see various early warning, air to air, long-range surface to air, and anti-air artillery threat systems come up to exercise the full capabilities of the radar warning receiver and provide relevant experience to the operator in the cockpit.”

The electronic warfare data collected during this testing will be shared with partner nations as part of an agreement signed last year between the U.S., Canada, United Kingdom and Australia. The agreement is called the Multinational Test and Evaluation Program.

“This agreement provides an unprecedented access to the partnering nations’ EW trials and data,” said Poliakov. “The CC-130J trial at the BAF is the first time the agreement has been used since it was officially signed in 2015. We invited representatives from the U.K. and Australia to witness this trial and will share all of the results with our allies.” 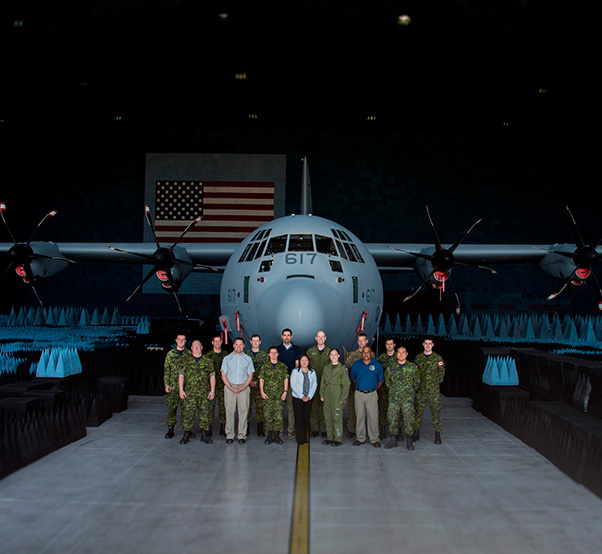 Poliakov added the agreement eliminates a lot of repetitive testing and road blocks and allows the partner nations to discuss directly with their allies in the test community about system capabilities and deficiencies. The countries share data and test planning.

“This agreement allows the allies to work together and contribute to the common goal of increasing crew and aircraft survivability in a potential threat environment.”

During a meeting last year, Poliakov said Mario Dorado of the 772nd TS invited the RCAF to Edwards to conduct EW testing on the CC-130J, thus initiating the first action of the MTEP.

The CC-130J brought to Edwards is from 8 Wing located at Canadian Forces Base Trenton, Ontario. Canada purchased 17 CC-130Js with the last one delivered in 2012.

On the outside the CC-130J looks almost identical to the legacy CC-130H Hercules, but internally the J model is essentially a completely new aircraft that can fly faster, higher and farther, while carrying heavier loads with better fuel economy.

While this is the first time an RCAF plane has come to test in the BAF, Poliakov hopes it won’t be the last.

“We have had a fantastic experience at the BAF. We were able to complete all planned test objectives and collect data, which we don’t normally have access to. This facility provides the missing link between systems testing in the lab and flight trials at a range.  I hope we’ll be able to integrate the BAF into our regular DEWS test cycles for all fleets in the RCAF.”

The CC-130J team is expected to complete testing this week.