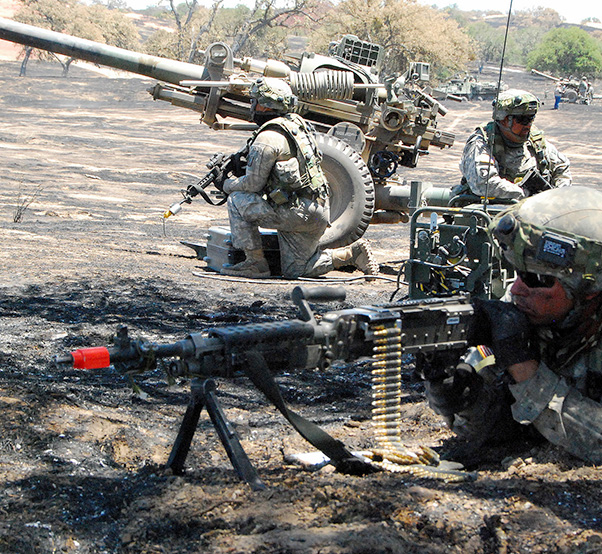 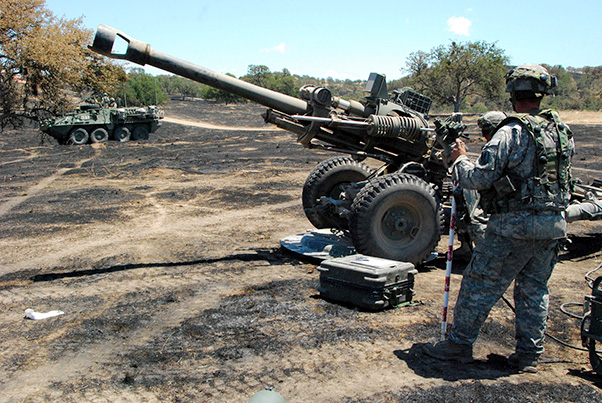 During annual training in May 2016 Soldiers from Bravo Battery, 1st Battalion, 143rd Field Artillery Regiment, based out Ventura and Santa Maria, of the California Army National Guard, conducted a platoon defense lanes training on the recently scorched earth of Camp Roberts. Their task was to set up their guns and begin fire missions while defending their position against active duty Soldiers from 4-17th Infantry out of Fort Bliss acting as enemy combatants. Strykers from the same infantry unit supported the National Guard unit in defense. Approx. 30 troops, including 1st Lt. Bloom, SFC Phillips and Bailes quickly positioned their men and fought off the enemy until the call came to uproot their guns and move out. Video evaluation personnel from Fort Hunter Liggett and skill set subject-matter-experts from First Army were on-hand to grade the unit’s performance as part of the much larger XCTC operation commanded by the battery’s higher headquarters, the 79th Infantry Brigade Combat Team.

More National Guard and Reserve units are partnering with the active component under the Army Forces Command Total Force Partnership Program, and one of the latest is an infantry brigade combat team from California.

All eight Army National Guard division headquarters are now partnered with an active component corps headquarters under the program, which seeks to operationalize the Army Total Force Policy signed by the secretary of the Army in 2012. U.S. Army Forces Command also partnered each of the 28 ARNG brigade combat teams to active BCTs in 2014, a FORSCOM spokesman said.

A recent example of how this type of partnership works is the California ARNG’s 79th Infantry BCT, partnering with the 1st Armored Division’s 4th Battalion, 17th Infantry Regiment (Stryker) out of Fort Bliss, Texas.

From May 15 to June 4, the two units conducted joint training at Camp Roberts and Fort Hunter Liggett, both in California.

As a lieutenant in 1999, he said he recalls his unit partnering with the 29th Field Artillery Regiment out of Fort Carson, Colo.

Since that time, however, focus shifted to operations in Iraq and Afghanistan, and the training partnerships melted away. The 79th IBCT, and others like it, trained in isolation.

That isolated training hurt readiness, Murphy said, because when a unit needed to deploy, more time was needed to integrate units at the pre-mobilization sites.

Now that has changed, he said, with this year being the first year in over a decade that his unit has partnered with an active-duty one, and that partnership is expected to continue, he added. 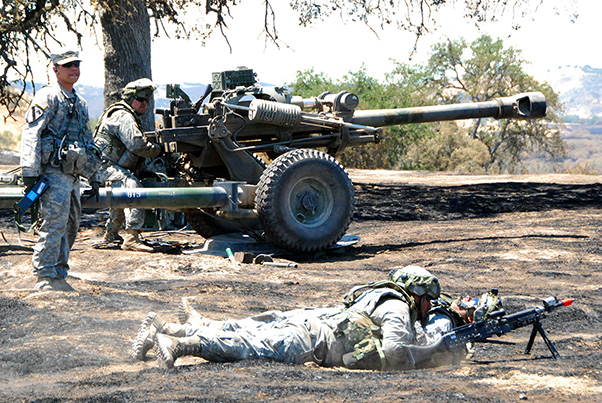 The recent exercise Murphy’s unit participated in with the 4-17th was called an “external combat training center” event, because it was not at an officially designated CTC.

Having said that, the training offered enough real-estate to conduct dynamic, high-fidelity training, including live-fire that comprised two gun raids with all the platoons, an airlift and an opposition force, he said. Also, First Army’s 3rd Bn., 358th Field Artillery, out of Joint Base Lewis-McChord, Wash., provided observer-controllers “who were very helpful to us.”

Feedback from the platoon leaders indicated that they felt the joint training experience was highly beneficial and it gave them a chance to improve troop-leading procedures and become fully engaged in the training, without the usual administrative requirements and distractors getting in the way, he said. The noncommissioned officers had similar sentiments. 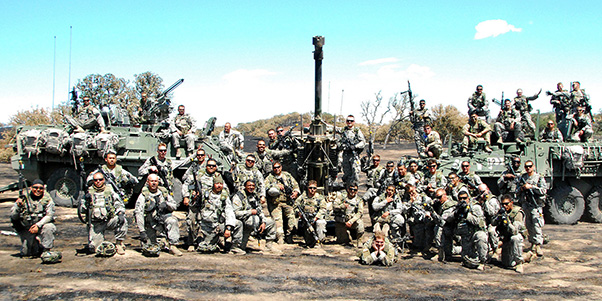 Murphy said he believes that as other units partner in likewise fashion, the Guard and Reserve will continue to maintain their status as a fully capable operational Reserve.

In March, the Associated Units pilot program — an Army Total Force initiative — was launched and Army Chief of Staff Gen. Mark A. Milley remarked: “Much of America’s Army’s capacity is resident in the Reserve components and we must rely more heavily on them to meet the demands of a complex global environment. The Associated Units pilot allows us to leverage the capabilities and capacities of the Active component, Army Reserve and the Army National Guard as one Army.”