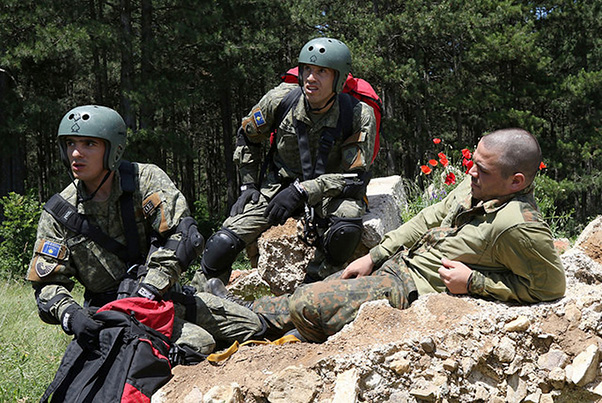 Kosovo security professionals and their NATO allies took center stage during one of the largest multinational interagency exercises in Kosovo.

The three-day exercise centered on enhancing interoperability between the multinational organizations by defining individual roles and sharing a mutual understanding of capabilities and capacities when responding to: civil disturbances, illegal migrant crossing, search and rescue situations, unexploded ordnance, and chemical, biological, radiological and nuclear threats.

Each of these scenarios focused on real world concerns currently seen throughout the Balkans and built to depict the ongoing migrant crisis in the European Union, where over 1,255,600 refugees have entered from Turkey. Clashes have broken out between police and the conditions of detention centers questioned. The severity of this crisis set the scene and made this a unique exercise for the otherwise year’s bi-annual event.

Silver Saber tested and validated KFOR’s tactics, techniques and procedures when responding to these incidents during a series of complex and multidimensional scenarios.

To ensure each organization fully understood the mission that lay ahead, day one and two focused on commander and staff decision making process as well as individual training of specified unit tasks such as fire phobia and crowd riot control techniques. 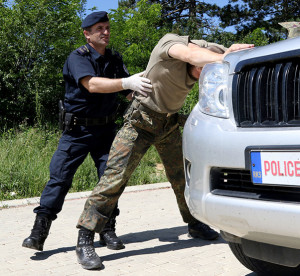 A member of the Kosovo Border Police searches a [migrant] trying to cross into Kosovo during Operation Silver Saber June 3, 2016.

Things went from immobile to kinetic on day three as the KP responded to reports of illegal migrants crossing a simulated border.

Once on scene, the KP and KSF documented and transported the migrants to a camp where medical providers were on hand to provide notional treatment along with food and water.

It was during the documentation process that scenario two was exposed. According to the role-playing migrants, two other refugees separated from the crowd.

The KP quickly notified the KSF Search and Rescue team, who moved in to search the ridgeline. Their cries for help could be heard as they approached a group of jagged rocks. As they advanced towards the injured refugees the routine search and rescue turned dangerous as they discovered an unexploded ordnance.

Explosive Ordnance Disposal teams from the KSF and KFOR responded to the scene, where they cleared the site together.

For those participating and observing the exercise, the exchange during the partnered extraction revealed the unspoken importance of the operation. While KFOR and KSF often train side by side, KFOR serves as third responders in a real-world incident.

This means, while they may never get the call to assist, KFOR must be able to work together and accomplish the mission alongside the KSF, with limited prior interaction.

“The interaction between the organizations in Kosovo and KFOR is very important,” said Capt. Jason Vipperman, Silver Saber liaison officer for Multinational Battle Group-East. “We needed to verify, if something really does happen, we can react and work together to get through the situation.” 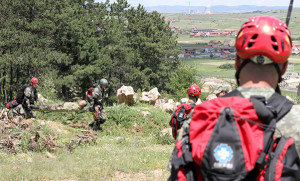 The interaction and communication between Vipperman and his Kosovo counterparts was vital to get through every phase of the operation, which did not end with the removal of the UXO.

After the hazard was disposed of, the search and rescue, team continued their hunt for the missing migrants. As they reached the hilltop, the severity of the situation became clearer.

At the bottom of the hill, three injured migrants laid sprawled across the unforgiving terrain. As the team reached the injured role players, they began simulated treatment and evacuation procedures.

With the migrants secured and safely transported to the refugee camp, the intensity and focus of the exercise shifted from Pomozotin, Kosovo to Camp Vrelo.

There the KFOR Tactical Reserve Maneuver Battalion responded to a group of unruly protestors.

Once on scene, the formation of KTM Soldiers met an intense reception as the protestors tried to overpower the KFOR team. Their efforts were unsuccessful and the KTM quickly restored peace to the area and handed control back to the KP.

“The liaison, communication and relief in place of the various responders was a crucial part of the exercise and the impromptu scenarios required enhanced collaboration between all responders particularly with regard to the Military Decision Making Process (MDMP),” said KFOR Commander, Maj. Gen. Guglielmo Luigi Miglietta. 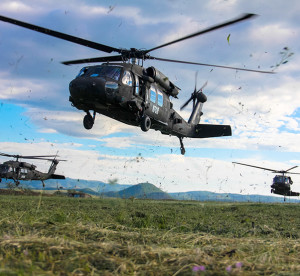 Having achieved mission success at a number of different locations, “Endex” signaled the end to Silver Saber 2016.

Although the exercise ended, Maj. Briton Orndorf, plans chief, said the MNBG-E would continue to build on what they learned from the operation.