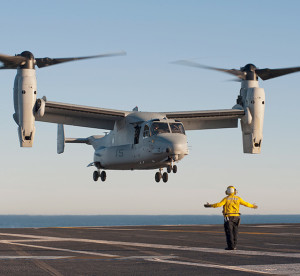 In preparation for the planned replacement of the C-2 Greyhound, USS Carl Vinson (CVN 70) received a V-22 Osprey from Marine Operational Test and Evaluation Squadron (VMX) 1 for landings and takeoffs, June 12.

The V-22 is being tested and evaluated as it is scheduled to become the singular logistics platform on an aircraft carrier for future carrier on-board delivery operations.

“These operations present an opportunity for our flight crews to gain experience landing on an aircraft carrier as opposed to landing on an amphibious ship,” said Marine Corps Lt. Col. Brett Hart, VMX-1 executive officer. “It allows us to become accustomed to a different set of operating procedures, and additionally allows Air Department sailors on board Carl Vinson to become accustomed to landing and handling tilt rotor aircraft.”

Since the Osprey is still a new platform for aircraft carriers, there were some things the flight deck crew had to be mindful of.

“I would encourage flight deck personnel to be aware of the extreme downwash that the V-22 generates,” said Hart. “In fact, I would say it’s even more extreme than an MH-53 [Sea Dragon helicopter], which can be dangerous. After today’s operations, it’s apparent that Carl Vinson’s flight deck crew was prepared, and everyone involved with landing the aircraft seemed to be giving themselves a little extra room.”

The operation proved to be a valuable training opportunity for Carl Vinson Sailors on the flight deck.

“As we phase out the C-2s and start implementing the V-22s during this evaluation phase, this is the first time our Sailors have had a chance to directly deal with a new aircraft,” said Aviation Boatswain’s Mate (Handling) 3rd Class Trell Matthias, an aircraft director assigned to Carl Vinson’s Air Department, V-1 Division. “Aside from the increased prop exhaust, I thought it was almost the same as landing a helicopter.”

Matthias added that day-to-day training and proper preparation are essential to make Air Department sailors ready to handle anything that may come across the deck.

“Only a handful of us are LSE (landing signalman enlisted) qualified and able to land helicopters and Ospreys,” said Matthias. “But we train hard to get the job done, no matter the aircraft.”

Hart went on to say that with the ability to take off and land like a helicopter, the Osprey is a valuable asset to both the Navy and Marine Corps. It possesses the speed, range and carrying capability of an airplane, but also offers the versatility and flexibility to land places that require neither runways or arresting wires.

“With the incorporation of the V-22, I think the fleet will also see additional capabilities from the entire group at-large, because we now have the option of taking cargo and personnel to some of the smaller decks without first having to come to the aircraft carrier,” said Hart. “With that considered, the carrier can expect to have potentially more flight deck and air space freed up, allowing it to launch more sorties in support of combat operations.”

Carl Vinson is currently underway conducting command assessment of readiness and training (CARAT) II off the coast of Southern California.