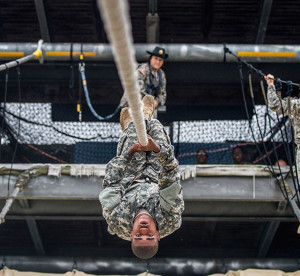 After losing his balance on a rope bridge obstacle, a Soldier in Basic Combat Training with E Company, 2nd Battalion, 39th Infantry Regiment, attempts to complete the task by using pure upper body strength to shimmy across to the other side with his Drill Sgt. looking on, Oct. 28, 2015. Soldiers in Basic Combat Training must complete all tasks at Victory Tower on Fort Jackson, S.C., which also boasts a 40-foot repelling wall, in order to graduate.

Since 1973, new recruits in what is now called Basic Combat Training at Fort Jackson, S.C., have been challenging and conquering the 40-foot monster known as Victory Tower in their first week of training.

The original concept was to help Soldiers develop a sense of confidence and the willingness to overcome fears early on in their Army careers. The thought process is that a Soldier needs to be confident in their own abilities before they can truly start to work with other Soldiers as a team.
For many, overcoming that fear of heights can be a daunting task but a rewarding one once the feat is actually accomplished.

“That was crazy!” said Pvt. Lisdy Sarmiento, A Company, 2nd Battalion, 13th Infantry Regiment, now in her sixth day of training and a future combat supply specialist with the Army Reserve.

And instilling that mindset early on is just what Staff Sergeant Trevin Sparks says is key to ensuring a successful cycle of training.

Sparks, one of several drill sergeants facilitating training at Victory Tower with A Company, June 8, says “this helps them [Soldiers] see that they can accomplish big feats that they never thought they could do.

“Right now they don’t think they can fill 50 sand bags or build a two-man fighting position with improved camouflage while running night missions. Things that will be vital to their survival on the battlefield. Doing something like this helps them see early on that they can do anything they set their minds too.” 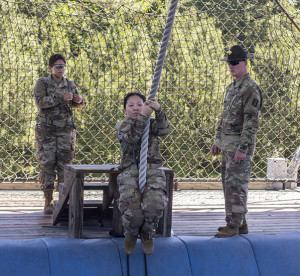 For many of the Army Reserve drill sergeants who support Basic Combat Training throughout the summer surge, training events like the one at Victory Tower can be just as important.

“This is as new to me as it is to these Soldiers. They’re in their sixth day of training I think and I’ve been here for five,” said Allan Kendall, an army reserve drill sergeant with F Company, 1st Battalion, 321st Infantry Regiment, 98th Training Division (IET).

Kendall, who graduated from the U.S. Drill Sergeant Academy last year, is performing his first annual training mission as a drill sergeant.

“I came out here and shadowed some of these drill sergeants a few weeks ago right here at the tower to get a refresher for what I was going to be doing, he said. “It definitely helped me out here today and in doing so I can help these Soldiers get through this portion and on the rest of their training.”

Although Victory Tower is just the foundation for the Soldiers training, it’s an important one.

“We have to get them to believe in themselves first before we can go on to the next phase which is working as a team, Sparks said. “Can you imagine 60 people who have never met before trying to work together as a team when they don’t even have confidence in their own abilities?”