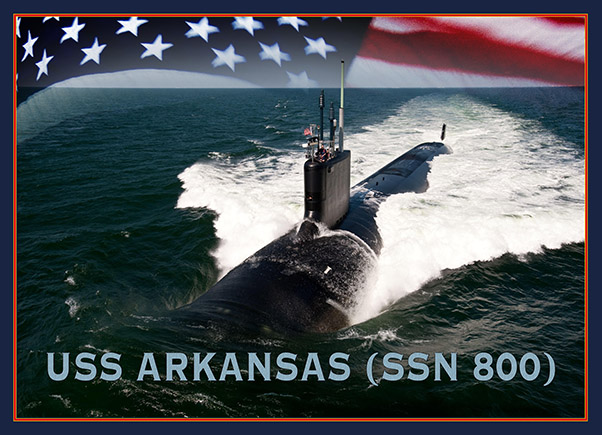 160609-N-LV331-002
WASHINGTON (June 9, 2016) A graphic representation of the future Virginia-class attack submarine USS Arkansas (SSN 800). The submarine will begin construction in 2018 and is expected to join the fleet in 2023. (U.S. Navy graphic by Mass Communication Specialist 2nd Class Armando Gonzales/Released)
Secretary of the Navy Ray Mabus announced June 15, 2016, that SSN 800, a Virginia-class attack submarine, will bear the name USS Arkansas.

“As we sail deeper into the 21st century it is time for another USS Arkansas; time to keep that storied name alive in our Navy,” said Mabus. “She will sail the world like those who have gone before her, defending the American people and representing our American values through presence.”

The submarine will begin construction in 2018 and is expected to join the fleet in 2023.

Virginia-class attack submarines provide the Navy with the capabilities required to maintain the nation’s undersea supremacy well into the 21st century. They have enhanced stealth, sophisticated surveillance capabilities and special warfare enhancements that will enable them to meet the Navy’s multi-mission requirements.

These submarines have the capability to attack targets ashore with highly accurate Tomahawk cruise missiles and conduct covert, long-term surveillance of land areas, littoral waters or other sea-based forces. Other missions include anti-submarine and anti-ship warfare, mine delivery and minefield mapping. They are also designed for special forces delivery and support.

Each Virginia-class submarine weighs 7,800 tons and is 377 feet in length, has a beam of 34 feet, and can operate at more than 25 knots submerged. They are designed with a reactor plant that will not require refueling during the planned life of the ship, reducing lifecycle costs while increasing underway time. The submarine will be built under a unique teaming agreement between General Dynamics Electric Boat (GDEB) and Newport News Shipbuilding, a division of Huntington Ingalls Industries, wherein both companies build certain portions of each submarine and then alternate deliveries. Arkansas will be delivered by NNS located in Newport News, Va.