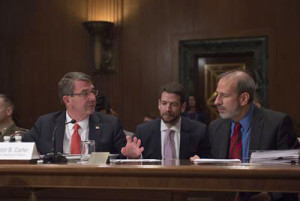 The Defense Department is getting closer to full audit accountability and will stick to its plan to achieve it, DOD’s chief financial officer told the House Armed Services Committee June 15.

One of the four pillars of Carter’s strategy is to reform the way the department does business, which is where audit effort and acquisition reform come in. The military services’ chief financial officers accompanied McCord at the hearing.

“Our focus on the audit has yielded substantial and measurable results over the last couple of years,” McCord said. “For the first time ever, the military services audited their annual budgets for [fiscal year] 2015. Combined with the successful recurring audits of other parts of the department that we’ve had for several years, about 90 percent of our [fiscal] ’15 budget was audited. Those audits did not produce a clean opinion the first time out for the services, but still, we learned a great deal from our initial effort and will be back at it for … [fiscal] ’17.”

Contracts in place
McCord said contracts are in place to audit the department’s full financial statement in fiscal 2018, the long-term goal of this effort.

A financial audit examines the department’s financial and business processes, and a successful audit confirms that the information on the financial statements is clearly and fairly presented, McCord said. “A financial statement audit does not necessarily tell you that those funds were spent wisely,” he added.

Having a clean opinion does not mean there is no waste, fraud or abuse, he said, and the lack of an audit opinion means that DoD systems and controls don’t meet audit standards, McCord said.

DOD’s size provides audit challenges
The very size of the department has worked against a clean audit,  and this effort began more than five years ago, McCord said, noting that the size of the effort is challenging.

“Our department … is not just another federal agency — in terms of the scope of our resources, our responsibilities and complexity, we are more like an economy,” he said. “Indeed, each of my colleagues here individually is responsible for the financial management of annual resources that exceed the [gross domestic product] of about 100 of the member nations of the International Monetary Fund.”

The experiences of the past few years show the department is on the correct track, McCord said, and he vowed to continue with the plan.
“We’re making progress, and we are fully committed to getting it done,” he said.