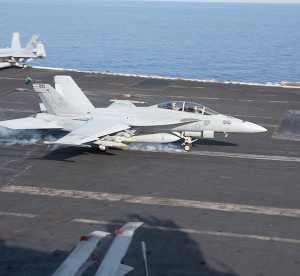 “I feel humbled and honored for having made the 9,000th arrestment,” said Godiksen. “It was just coincidence that I had the opportunity at the right time. It’s a nice accomplishment to have, not only for me, but the crew and those who work on the flight deck as we approach the end of our deployment.”

Truman’s arresting gear system consists of cables on the flight deck that aircraft tail hooks catch, to decrease speed from approximately 170 mph to 0 mph in order to safely land on a runway about 330 feet long. Below the deck are the arresting gear engines and the sheave dampers that take the initial impact and reduce cable tension, as well as an “anchor” that secures the cables to the ship, all of which are maintained and operated by the ship’s V-2 division of Air Department.

“Successfully accomplishing 9,000 traps is a testament to the pride Sailors in V-2 division take in their work and the ship’s mission,” said Chief Aviation Boatswain’s Mate (Equipment) Ed Harris. “None of this would be possible without the hard work and dedication of our Sailors and our flight deck warriors.”

With this accomplishment, Truman adds another notch to its belt of achievements during its 2015-2016 deployment.

“The 9,000th trap is significant in that it shows the level of commitment our Sailors put in every day,” said Lt. Cmdr. Chad Clark, Truman’s aircraft handling officer. “It’s not just that one time; it’s 9,000 times they’ve done this work. It’s not just the crew on the flight deck; it’s below decks as well. Every sailor plays a vital role in supporting one another, from food service providing chow to engineering department providing water and air conditioning. As the counter ticks past 9,000, Sailors continue their mission to combat terrorism around the world.”