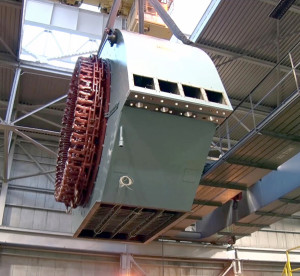 A new stator has been installed in the AEDC Propulsion Wind Tunnel motor drive. Due to its large size and weight, the stator for the M4 motor was put in place by a large crane. The function of the M4 stator is to rotate the main compressors for the PWT 16-foot transonic and 16-foot supersonic wind tunnels.

During the early 1950s, AEDC began to stand-up a new and much larger wind tunnel testing facility than was available anywhere else in the nation at the time.

To power this state-of-the-art 16 foot test cell to Mach speeds, the world’s largest electric motors ever built were designed and fabricated. Westinghouse East Pittsburgh Plant in Philadelphia, Penn., was commissioned to undertake this monumental effort.

The PWT facility is well known for its four powerful motors and having the world’s most horsepower on a horizontal shaft driving its compressors. With such large equipment and rigorous test schedules, regular maintenance is important.

In 1971, the original manufacturer was commissioned to “rewind” the two largest of the four PWT main drive motors due to electrical insulation failure.

The electrical insulation failure was a result of stress and decades of tunnel operations. Repairs and the years of service eventually took a toll on the aged stator’s electrical insulation, which began to show up as degraded results in the periodic testing reports for the motor.

The Air Force determined a replacement of the stator was needed when funding became available.

The PWT Main Drive M4 Motor Stator Replacement Project was approved at a cost of $5.5 million and worked by Westinghouse, now TECO Westinghouse Motor Corporation of Round Rock, Texas.

TECO began work in October 2014. The design portion of work took approximately four months, and AEDC personnel were involved in the review process of those drawings. The mechanical construction of the stator frame and core components took approximately eight months.

In parallel with the steel frame construction, the copper coil fabrication was accomplished in England by Sulzer/Dowding & Mills. TECO began installing and winding the core of the stator in August 2015 and worked a three-shift operation until the first of December 2015.

AEDC personnel traveled to TECO for the factory acceptance testing in mid-December.  The stator was then readied to be shipped by large truck/trailer and left Round Rock, Texas, on Jan. 19, 2016.

“Transportation logistics were handled through TECO Westinghouse and a third-party trucking firm but monitored daily by the project team here at AEDC,” said Sinemus. “The trip was originally slated for a three day travel arriving on base Friday, Jan. 22. However, due to weather, rerouting and the request of highway permits, delivery was delayed until Jan. 28.”

The new stator was then mated with the existing rotor and placed into position. It was mechanically and electrically connected and readied for a “magnetic-center” run to determine the proper stator positioning in reference to the M4 rotor. After repositioning the stator, the final mechanical and electrical connections were made.

With completion of the installation work, the M4 motor was operated at maximum load on April 19 to verify that the stator could produce its nameplate rating. This final operational acceptance test required approximately 2.5 hours of wind tunnel operation when the stator’s temperature stabilized and was determined to be within the Air Force Statement of Work requirement.

With the installation of the new M4 stator, PWT Main Drive will be able to return to its maximum torque capability.

Though there were a few setbacks along the way, Sinemus said one can expect them when working with “not only technically unique, but mega-sized equipment like this.”

“The project team was able to tackle each obstacle, ensuring mission success,” he said. “It gives us all a sense of accomplishment when such a historical feet of engineering and keystone piece of the facility is brought back to full operational capability.