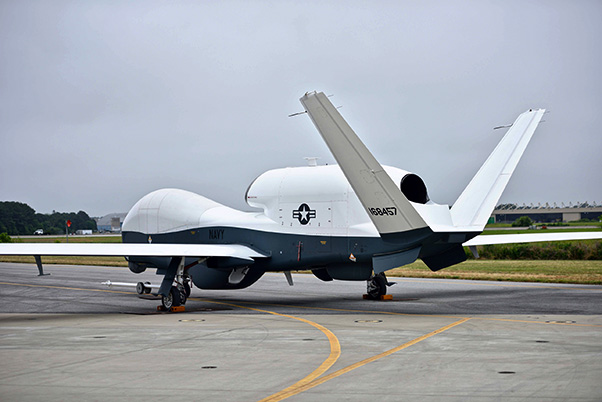 The MQ-4C Triton prepares for a flight test in June 2016 at Naval Air Station Patuxent River, Md. During two recent tests, the unmanned air system completed its first heavy weight flight and demonstrated its ability to communicate with the P-8 aircraft while airborne.

During a flight test June 2, an MQ-4C Triton and P-8A Poseidon successfully exchanged full motion video for the first time inflight via a Common Data Link, marking another interoperability step for the program.

The test demonstrated Triton’s ability to track a target with its electro-optical/infrared camera to build situational awareness for a distant P-8 aircrew.

“In an operational environment, this would enable the P-8 aircrew to become familiar with a contact of interest and surrounding vessels well in advance of the aircraft’s arrival in station” said Cmdr. Daniel Papp, Triton integrated program team lead.

The MQ-4C Triton’s ability to perform persistent intelligence, surveillance and reconnaissance within a range of 2,000 nautical miles will allow the P-8A aircraft to focus on their core missions.

“The heavy weight envelope expansion work will enable Triton to realize its long dwell capability and become the unblinking eye for the fleet,” Papp added.

Triton is designed to fly missions of up to 24 hours at altitudes over 10 miles high, allowing the system to monitor two million square miles of ocean and littoral areas at a time. Since its first flight in 2013, Triton has flown more than 455 flight hours. The Navy will continue testing Triton at Patuxent River, Md., to prepare for its first planned deployment in 2018.