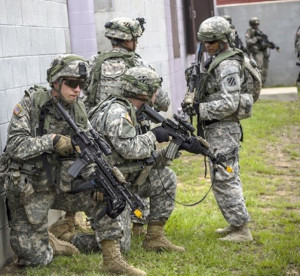 In October 2015, Soldiers from 3rd Brigade, 3rd Infantry Division, take enemy fire as they prepare to enter and clear a building during the live training at McKenna Urban Operations Complex at Fort Benning, Ga.

During the month of June, nine squads of Soldiers from the 82nd Airborne Division and the 75th Ranger Regiment are participating in an integrated training program at Fort Benning, Ga., that focuses on human performance enhancement.

The Squad Overmatch Study — Tactical Combat Casualty Care, in its second year as part of the Army Warfighting Assessment, is a result of 2013 and 2014 studies related to reducing post-traumatic stress disorder through training.

But PTSD is not what SOvM-TC3 is addressing directly, said Rob Wolf, assistant program manager from the U.S. Army Program Executive Office for Simulation, Training and Instrumentation in Orlando, Fla.

“All we are trying to do is develop better warrior skills, better cognitive skills, improve their mental models and behaviors,” Wolf said.

He added that it is possible to have an indirect impact, but that would be a different and more complex study.

“Walter Reed (Hospital) gave us the 98 top PTSD-related stressors and we’ve incorporated the top 10,” said Wolf. “All our scenarios are graduated stress exposure training based on those scenarios that are the leading cause of PTSD, [applied] in the gaming environment and in the live environment.”

“It’s really an integrated training approach. And when we say integrated, the idea is following a methodology we have used for decades, which is a crawl, walk, run methodology,” said Chris Jaques, chief of individual and systems training division at the Maneuver Center of Excellence Directorate of Training and Doctrine.

“With respect to human dimension, all of this is about developing judgment, decision making, leadership in the teams, good communication skills, the mental models that they need to draw from in these stressful tactical situations,” said Wolf. “That’s the entire collective environment that we are trying to do. And you do that through immersive training.”

“So we give them the classroom to give them the foundation skills. We let them practice it, so we develop the cognitive, and put it in the live environment,” he added. “And the whole time it is graduated stress exposure, and it is repetitive learning of the same material in more complex environments so that you can adapt to it.”

One unique aspect of the SOvM-TC3 is the focus on casualty care with the use of the individual first aid kit in virtual practice. Having the model and the virtual practice gives Soldiers the visual and cognitive recognition of what to use and what to treat, Wolf said.

Additionally, this current study is collecting physiological data on the participants in order to monitor stress levels, Wolf said.

The actual study is sponsored by the Defense Health Program, but there is a parallel effort to assess the program for application in home station training, Jaques said.

“Our initial focus is on the maneuver because that is what we (MCoE) are responsible for,” Jaques said. “But it has application across the Army and the potential is there.”