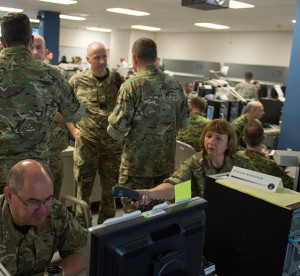 Participants at the Cyber Guard 2016 exercise work through a June 16. 2016, training scenario during the nine-day exercise in Suffolk, Va., that concluded last week. Air Force Lt. Gen. James K. “Kevin” McLaughlin, the deputy commander of U.S. Cyber Command, told the House Armed Services Committee June 22 that the exercise is critical to training cyber warriors to operate in the new domain.

The deputy commander of U.S. Cyber Command detailed the command’s efforts to build capabilities and capacity in the Cyber Mission Force during his testimony before the House Armed Services Committee June 22, 2016.

The force will eventually be made up of 133 teams, which will give the department “a means to apply military capability at scale in cyberspace,” he said.

Cybercom depends on three factors for success, McLaughlin said: the quality of its people, the effectiveness of their capabilities and the proficiency its people bring to bear in employing capabilities. The command is a mix of active-duty personnel and reserve component service members.

“As on June 10, out of a target total of 133 teams that will be part of the Cyber Mission Force, we have 46 teams that are at fully operational capable status and 59 that are at initial capability status,” the general said. “These teams currently comprise 4,684 total people that we will build eventually to 6,187 when we finish.”

He noted that even when a team is not fully operational, they are still contributing to the command’s worldwide efforts. Combatant commanders can now call on Cyber Mission Force teams to bring effects to their operations.

“Such work occurs daily in the fight against ISIL, where our teams are conducting cyberspace operations in support of U.S. Central Command’s ongoing efforts to degrade, dismantle and ultimately defeat ISIL,” McLaughlin said.

Real-world training scenarios
Training the force continues, he told the committee, noting the annual Cyber Guard exercise that concluded last week. The exercise provides realistic training for all stakeholders — federal, state, local and private-sector partners. “The response to Cyber Guard from our public and private partners has been tremendous,” McLaughlin said. “Dozens of critical infrastructure companies have expressed interest in participating in it.”

Exercises like Cyber Guard allow senior officials to observe the types of issues they would see in real cyberattacks and helps generate a playbook that would help officials respond to actual attacks, he said.

While people are the most important resource to the command, the general also had an infrastructure request for the committee. “Ongoing efforts to develop tools, such as the persistent training environment, the unified platform, cyber situational awareness and the joint information environment, must continue to be resourced,” he said. “These capabilities are critical in ensuring our cyber warriors are equipped to counter sophisticated and dynamic adversaries.

“The accelerating pace of technology innovation and our adversaries changing tactics require well-trained, well-resourced and agile force to perform all three of the critical missions we support,” McLaughlin said.