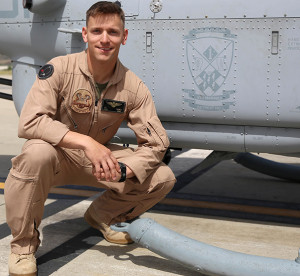 As part of the program, Marine Aircraft Group 39 sends pilots to Bridgeport to train alongside infantry battalions so they may gain a better understanding of the unit’s operation.

“The end state is to have a closer integration between the [Marine Air Ground Task Force], in particular with the aviation combat element and the ground combat element,” said Marine Corps Col. Michael Borgschulte, MAG 39’s commanding officer.

“One of the ways we get to that end state is through four lines of effort,” he said.

Partnering air, ground units
Borgschulte emphasized that the No. 1 priority is to partner MAG 39 units with ground combat element units and conduct professional military education and training to build lasting relationships that would lead to more symbiotic training evolutions.

“The second line of effort would be what I’m calling the Aviator Immersion Program, so what I’ll do is take the pilots, and I’ll put them with normally a battalion for 45 to 60 days to get a better appreciation of what the ground combat element is doing,” Borgschulte continued. “The third line of effort is a medium-scale exercise, and [this involves us] using the synergy of all the aviation assets and ground assets in a grassroot-led exercise, whether it be a [recovery of aircraft and personnel] package [or some other contingency mission].”

As part of the Aviator Immersion Program, Grimes filled the role of the air officer for three different training evolutions during his time with the infantry battalions.

He worked with 2nd Battalion, 4th Marine Regiment, during a Marine Corps Combat Readiness Evaluation, which helped the Marines improve combat readiness and prepare for combat scenarios. He also trained with 2nd Battalion, 5th Marine Regiment, in mountain warfare, which taught Marines mountain climate survival and assault climber techniques, and a fire support coordination exercise, which gave Marines the training they needed to effectively call in artillery or air support.

“The main point of this program is to get more pilots over to the infantry units so they can have a better understanding of how they operate on a company or battalion level, and they can build relationships with the company and platoon commanders,” Grimes said. 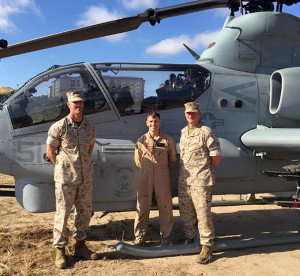 “As a Cobra pilot, my goal is to support those Marines on the ground,” said he explained. “If all my training to support them is so disconnected that I never communicate or work with them, I think that kind of fails the whole [Marine Air Ground Task Force] idea.”

Working so closely with a ground unit was unlike working with his air unit, Grimes observed.